The throat seemed an odd site for a virus linked to cervical cancer, yet several small studies published in the 1990s reported finding human papillomavirus (HPV) in squamous cell carcinomas of the oropharynx.

By 2000, Gillison was first author on a seminal study showing a strong association between HPV and oropharyngeal cancer. The research, led by Keerti V. Shah, MD, Dr. PH, and published in the Journal of the National Cancer Institute (JNCI), analyzed tumors from 253 patients with head and neck squamous cell carcinoma (HNSCC), screening them for more than 30 types of HPV.

One fourth of the tumors were positive for the virus, and 90 percent of those were HPV16, the cause of cervical cancer. HPV33 turned up in three cases, one of which was coinfected with HPV31 and one with HPV18. All three of these are high-risk cancer viruses. One case was positive for the low-risk HPV11.

Of the virus-positive tumors, 57 percent developed in the oropharynx—the area of the throat that encompasses the base of the tongue and the tonsils—and the great majority of those arose in the tonsils. The tumors also showed a high viral copy number and tumor-specific viral clones, indicating that they originated from a single infected cell.

The real surprise for the investigators came when they calculated the estimated survival: It was more than 91 months for patients with HPV-positive tumors and 76 months for those with HPV-negative tumors. After the investigators adjusted for age, lymph node status, alcohol consumption and TP53 mutations, they found that the HPV-positive group had about half the risk of death from cancer than their HPV-negative counterparts.

“Our findings strongly suggested that this was a distinct type of head and neck cancer that affected people who did not necessarily smoke and drink, whose tumors were largely poorly differentiated and located mainly in the oropharynx, and had a better prognosis,” Gillison says.


“Those findings shook the field,” Gillison says. “We thought head and neck cancer was caused largely by alcohol and tobacco, but here was a major new risk factor.”

The Centers for Disease Control and Prevention (CDC) estimates that HPV is the most common sexually transmitted infection in the United States. A 2007 National Health and Nutrition Examination Survey (NHANES) study reported HPV prevalence rates of 24.5 percent in women age 14 to 19, and 44.8 percent in young women age 20 to 25. Combining the two age groups yields an overall prevalence of 33.8 percent, which corresponds to 7.8 million infected young women.

“We now need to track this infection over time to learn which infected individuals are at greatest risk of developing cancer, how best to treat those who develop the disease and whether HPV vaccines can prevent the infections that promote development of a malignancy.”


Gillison was convinced of the association between HPV and oral cancer as early as 1998. As the data accumulated for the JNCI paper, she began preparing for follow-up studies. She reviewed the literature to learn all she could about the role of HPV and lower genital tract infections and used this as a framework for planning investigations of HPV and oral cancer.

Her initial work included studying how to collect and process oral HPV samples to ensure that they were reproducible and to maximize detection. One study looked at the effect of HPV DNA purification on oral samples. “We found it could be huge, and we were surprised by that,” Gillison says.

In 1998, Gillison and her colleagues planned a case-control study that would help build a causal association between HPV and oropharyngeal cancer and guide future prevention efforts, such as a vaccination program.

The study examined 100 cases of oropharyngeal cancer and 200 control patients. The New England Journal of Medicine (NEJM) published the findings in 2007. The disease was significantly associated with HPV16, which they found in 72 of the 100 tumor specimens, and this was true whether subjects had a history of heavy tobacco and alcohol use or not.

However, tobacco and alcohol were associated mainly with HPV-negative tumors, while having six or more oral sex partners or a high lifetime number of vaginal sex partners—26 or more—tripled the odds of developing oropharyngeal cancer.


These findings caused Gillison to wonder what influence HPV infection might be having on oral cancer incidence generally, particularly since behavioral studies were showing that oral sexual practices were widespread among adolescents.

Using SEER data, they tabulated oral squamous cell carcinoma cases from 1973 through 2004. Next, they used disease classification codes to divide the cases into anatomic sites that were potentially HPV-related and sites that were probably HPV-unrelated. The former included tumors of the tonsils, oropharynx and tongue base (17,625 cases); the latter included cancers of the tongue, gum, palate and floor of mouth (28,144 cases).

Their findings, published in the Journal of Clinical Oncology (JCO) in 2008, showed that the incidence of potentially HPV-related oral SCC increased significantly over the time period, while the HPV-unrelated cancers decreased over that period. (They also learned that potentially virus-related cancers were diagnosed earlier, age 61 vs. age 63, than virus-unrelated cancers.)

Furthermore, the investigators learned that people born after 1930 had a higher incidence rate of potentially HPV-related cancers than people born before that year, and that the risk grew with every birth cohort thereafter.

“This suggests that a societal change was behind the rising incidence of potentially HPV-related cancers,” Gillison says. A likely societal change that could influence the incidence of sexually transmitted infections was the sexual revolution of the 1950s and ‘60s, particularly the greater acceptance of more partners, she says.

“The single greatest risk factor for HPV infection is sexual contact with someone who has HPV infection,” she says. “The greater the number of partners you have, the higher the probability that one of those partners is HPV-positive.”


Gillison learned more about the risk factors for HPV-positive oral cancer by leading a hospital-based case-control study that involved 240 patients with cancer of oropharynx, larynx or with an unknown primary of the head and neck. Ninety-two of the tumors were HPV-positive. Each case was matched with two control subjects. All participants were asked to self-report on sexual behaviors such as the number of vaginal and oral sex partners, participation in casual sex and use of barriers during sexual activity, and on their use of tobacco, alcohol and marijuana.

She planned the study in 1998; JNCI published the findings in 2008. The HPV-positive cases were associated with sexual behaviors and frequency of marijuana use, but not with tobacco and heavy alcohol use. HPV-negative cases, on the other hand, were associated with cigarette smoking, heavy alcohol use and the number of teeth lost (a marker of oral hygiene), but not with sexual practices or marijuana use. This provided further evidence that HPV-positive and HPV-negative were different diseases, and it suggested that oral cancers can develop through at least two pathways, one initiated by HPV infection, the other by tobacco and alcohol use (see sidebar).


So if HPV-positive and HPV-negative oral cancers are different diseases, do patients respond differently to therapy? In 1998, Gillison and her colleagues began exploring this question prospectively by adding a correlative study of survival outcomes and treatment response to an Eastern Cooperative Oncology Group (ECOG) phase II trial then under design.

The study involved 96 patients with stage III and IV oropharyngeal or laryngeal cancer were treated with chemotherapy and radiation. The two-year survival for HPV-positive and HPV-negative patients was 95 percent and 62 percent respectively after a median followup of 39 months. The findings, published in JNCI in February 2008, clearly suggested a strong association between HPV status and survival of oral cancer patients.

This was confirmed by another study led by Gillison of 206 HPV-positive and 117 HPV-negative patients and presented at the 2009 American Society of Clinical Oncology meeting.

Given that these are two separate diseases, the most important question now is whether patients with HPV-positive cancers should receive different therapy. “We don’t know,” Gillison says. “Currently, the standard of care for these patients is the same as it is for head and neck cancer generally.”

Mounting evidence—much of it from Gillison’s studies—shows that HPV-positive oral cancers have a better prognosis. Some physicians and patients are using that information alone to determine treatment, and this makes Gillison uneasy.

Those clinical trials need to be done soon, she adds.

“Overall, the literature consistently suggests that HPV is an important prognostic factor for head and neck cancer,” Gillison says. “But it also says that the reasons for that improved survival are probably multifactorial, and the extent to which they depend upon the patient’s treatment is unclear. At this point it appears that the survival difference between the HPV-positive and HPV-negative patient is independent of therapeutic choice, as long as the therapy is based on some standard of care. The question now is …which therapy is the best choice for each group?”

In Scandinavia, for example, the standard treatment for tonsilar cancer is radiation alone, Gillison says, noting that HPV-positive and HPV-negative patients have a five-year survival of 85 percent and 45 percent, respectively.

In Italy, tonsilar cancer is treated with surgery followed by radiation if pathology indicates it. A retrospective analysis showed the five-year survival for surgically treated HPV-positive and HPV–negative patients to be 80 to 85 percent and 40 to 45 percent, respectively.

“People will tell me that HPV-positive patients do well with surgery alone,” Gillison says. “I get patients referred to me who have been treated with surgery alone and were told that they were fine and don’t need radiation therapy.”

Others believe just the opposite, she says. “One person said to me, ‘Patients want survival. Survival is their ultimate goal, not minimizing toxicity. So we have to give them intensive therapy.’ But we don’t know if intensive therapy determines the outcome or not for HPV-positive patients.

“We don’t know how to make these decisions because there is insufficient data,” she says. “We need clinical trials to answer these questions. And even that will be tricky. How do we determine the best therapy for patients who seem to do very well with any modality we use? It requires huge sample sizes.”

It is a challenge she hopes to overcome at Ohio State. “I have found a lot of flexibility here to do what I want to do, and I think the institution cares and wants people to succeed,” Gillison says. She hopes to take advantage of the wide-ranging resources available at Ohio State, where cancer center members come from 13 different colleges within the University. Already she has begun an epidemiologic study of oral HPV infection in healthy Americans through NHANES. She is also working with colleagues in national clinical cooperative groups to design therapeutic trials specific for HPV-positive or HPV-negative patients, and she is involved in studies that will assess the effectiveness of HPV vaccines for the prevention of these cancers. 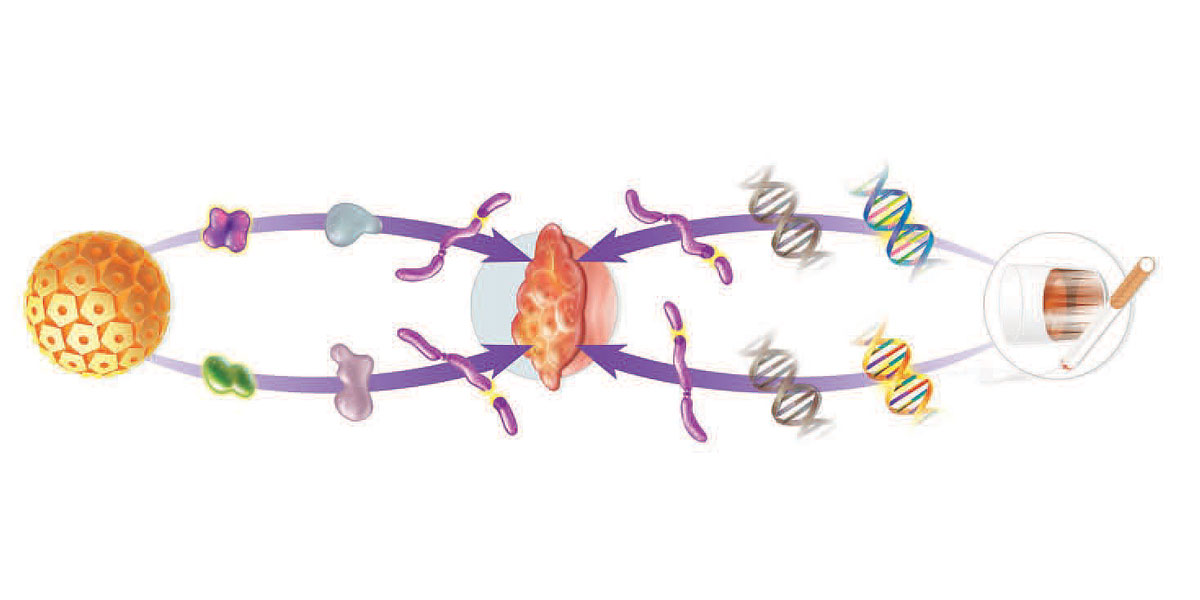 Pathways to oropharyngeal cancer Research by Maura Gillison, MD, PhD, a medical oncologist and specialist in human papillomavirus (HPV)-related oral cancer at Ohio State, and others suggests that oropharyngeal cancer in HPV-positive and HPV-negative tumors develops through different molecular pathways. The same cell regulatory and DNA repair pathways are inactivated in both cases, but the inactivation happens in different ways. HPV-positive tumors are driven by proteins produced by carcinogenic strains of HPV, particularly HPV16, that silence the p53 and Rb tumor suppressor genes. (left side of illustration). Tobacco and alcohol use tend to drive HPV-negative tumors. They also silence p53 and Rb, but directly, through mutations (right side of illustration).