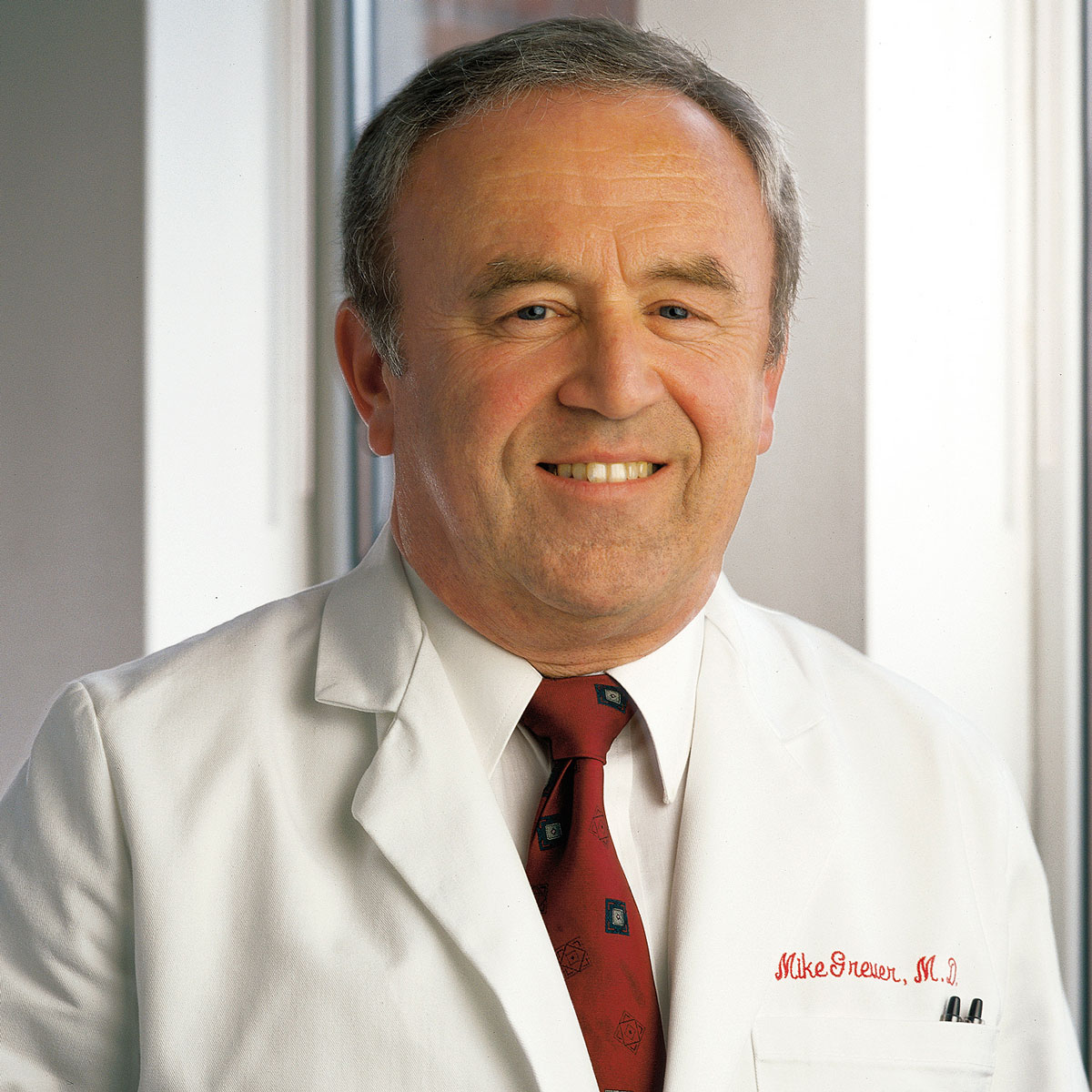 Patients with chronic lymphocytic leukemia (CLL), the most common leukemia among adults in the United States, have few therapeutic alternatives despite decades of research.

“Drugs developed over the past 30 years for treating CLL have shown responses in patients, but the disease remains incurable, so we just can’t rest on what we’ve done so far,” says Michael Grever, MD, professor and chair of the Department of Internal Medicine, and co-leader of the Experimental Therapeutics Program at the Ohio State University Comprehensive Cancer Center – Arthur G. James Cancer Hospital and Richard J. Solove Research Institute (OSUCCC – James).

“We will probably never find one drug that cures CLL,” adds Grever, a specialist in hematologic malignancies, “but if we can find several that act against it, they may ultimately work in combination to increase the number of patients who have durable remissions.”

New agents are needed. To develop them, Grever, Byrd and other top leukemia researchers at the OSUCCC-James are collaborating to translate basic laboratory findings into novel therapies that range from natural products and antibody-like molecules to immune modulators and epigenetic agents.

CLL usually strikes people age 50 or older, though its causes remain unknown. Malignant B lymphocytes accumulate to high levels and lose their ability to recognize antigens and produce antibodies, leaving patients vulnerable to opportunistic pathogens. The clinical course is widely variable. Some patients survive only months while others live 10 years or more.

The standard chemotherapy for CLL is fludarabine. However, as Grever, Byrd and colleagues note in a May 2009 paper in the journal Blood, this agent targets not only leukemic B cells but also depletes normal T cells, further eroding immunity and raising infection risk. Even when fludarabine is initially effective, patients eventually develop drug resistance and relapse through such mechanisms as dysfunction of the TP53 tumor-suppressor pathway. “Although deletion of 17p13.1, the chromosomal site of the TP53 gene, is uncommon in CLL at diagnosis,” they write, “this abnormality increases in frequency with disease progression.”

Treating fludarabine-resistant CLL is even more difficult. The only FDA-approved therapy is alemtuzumab, a drug that is also lethal to T cells and can cause a range of dangerous complications, including infections, autoimmune disorders and secondary cancers. The median survival for these patients is just 13 months.

“Alemtuzumab-treated patients face a 55-percent infection rate, and half of these infections are rated as serious or life-threatening,” says David Lucas, PhD, a research scientist who manages Grever’s laboratory. “The fact that alemtuzumab was approved despite these problems indicates the critical need for new therapies for these patients.”

The goal, he says, is to find new agents that kill CLL cells, particularly the drug-resistant type, without damaging T cells or other cells. Investigators at Ohio State are pursuing multiple approaches that involve both natural and synthetic products.


Grever notes that nearly 40 percent of all drugs used to treat cancer are derived from natural substances isolated from plants, fungi and soil microbes. A key strategy in drug discovery, he says, is identifying and testing structurally unusual agents that show novel biological activity against human disease.

“We look for products with molecules that don’t exist in humans, that have unique chemical structures and that don’t overlap with drugs already in use,” Grever says. “If we find one of those, and it kills leukemia cells at concentrations that are potentially achievable in patients, we will want to investigate it.”

One of the most promising natural compounds investigated recently at Ohio State is silvestrol, isolated from the Indonesian plant Aglaia foveolata by A. Douglas Kinghorn, PhD, DSc, the Jack Beal Professor and Chair of Natural Products Chemistry and Pharmacognosy in the College of Pharmacy.

The May 2009 Blood paper described for the first time silvestrol’s significant preclinical activity against B-cell malignancies. Even more encouraging, the findings from both in vitro studies and a mouse model suggest the agent has greater potency against B cells, including CLL cells, relative to T cells. They also demonstrate silvestrol’s effectiveness in tumor samples from patients with TP53 deletions and its selectivity in blocking translation of the MCL1 survival protein.

“It was immediately apparent that this compound was bioactive,” says Kinghorn, an expert in natural-product drug discovery who was recruited by Grever to Ohio State in 2004. When he arrived, Kinghorn, a professor of medicinal chemistry and pharmacognosy, had already isolated silvestrol, documented its cytotoxic activity and characterized its structure and stereochemistry. The compound, he and his colleagues reported in the Journal of Organic Chemistry, possesses a structurally unusual carbon backbone and a side chain that is unprecedented in nature.

But by then a patent for the compound had been obtained by the Malaysian state of Sarawak, prompting the American drug company that had helped Kinghorn study silvestrol to pull out of the project.

“It seemed I was the only person in the world who cared about this compound at the time,” he recalls, explaining that, as a medicinal chemist, he had done all he could with it. “So I was really glad when Drs. Grever and Lucas shared my excitement and agreed to preclinically test silvestrol and its analogs.”

Based in part on data from the paper in Blood – for which Kinghorn was a co-author – the National Cancer Institute’s Developmental Therapeutics Program has agreed to further develop silvestrol in anticipation of future clinical testing.

“We then hope to submit an investigational new drug application to the FDA,” Grever says. “If that is approved, we will use the resources of the OSU Phase I program to design and conduct a clinical trial of silvestrol.” (For more about the discovery of silvestrol, see "Fractionating Forests.")


Flavopiridol is another agent rescued from oblivion by Ohio State researchers. Grever, Byrd and colleagues consider it one of the most exciting agents ever discovered for the treatment of CLL, primarily because the drug has shown efficacy against fludarabine-resistant disease – particularly in patients with TP53 deletion – in phase I and II clinical trials at the OSUCCC – James. Grever says it also works against bulky disease (lymph nodes greater than five centimeters in diameter) and doesn’t appear to increase the risk of severe infections as alemtuzumab does.

Flavopiridol was once written off as ineffective against human cancer by the pharmaceutical company investigating it. Grever and Byrd also found that it was ineffective when administered at the recommended dose of 24- to 72-hour continuous infusions. But when laboratory experiments revealed that a higher dose given over just a four-hour period worked well against CLL cells, they collaborated with pharmacy colleagues to devise a four-hour dosage that maintained a similarly effective drug concentration in patients’ blood.

This led to a clinical trial in which CLL patients received half the weekly dose intravenously in a 30-minute bolus to escalate the drug level, immediately followed by the remaining half in a four-hour continuous infusion. Following this amended schedule, flavopiridol proved extremely active against refractory CLL, producing responses in approximately 40 percent of patients. Confirmation of this success in a subsequent phase II study at Ohio State, with results to be published in the Journal of Clinical Oncology, led to an international of the therapy that is currently under way.

“It’s like an expanded phase II study to show that other institutions can safely administer this therapy to patients with far-advanced disease and get good results like we have,” Grever explains. As of August 2009, more than 100 patients at more than 20 hospitals had entered the trial worldwide.

In 2003, Byrd presented to the American Society of Hematology a report from national phase II and III clinical trials in which the monoclonal antibody known as rituximab became the first of any modern therapy to show significant improvement in overall survival for CLL patients. Rituximab targets the CD20 protein on malignant B lymphocytes and spurs apoptosis, or natural cell death.

Byrd’s lab has also reported promising results from the use of TRU-016, a “small modular immunopharmaceutical” (or SMIP) agent that recognizes the CD37 protein on the surface of CLL cells. This newly engineered drug candidate attaches to CD37 and triggers an immune response that kills the cell. In a leukemia animal model, this compound worked as well as rituximab.

“This agent is very active against CLL and is currently in phase I studies,” Byrd says, noting that it works “in a manner different from rituximab or other B-cell-directed antibodies.”

Another approach involves knocking out the MCL1 survival protein, which normally keeps immune cells healthy and promotes their development. However, Byrd and his colleagues have found that CLL cells that overexpress MCL1 are more resistant to anticancer drugs such as rituximab. Byrd says these findings, reported in the journal Clinical Cancer Research, “give us a rationale for targeting this protein in CLL cells and suggest that reducing MCL1 levels should enhance the action of rituximab or perhaps other agents.”


A recent study led by Byrd, and published in Proceedings of the National Academy of Sciences Early Edition, found that a gene called FOXD3 may play a role in CLL development because it is silenced early in the disease, even before symptoms appear, and is followed by the silencing of other genes. The findings suggest that monitoring the expression of certain genes may serve as markers for detecting CLL earlier.

“The silencing of FOXD3 might represent a very early gene involved in the initiation of CLL that we can target for re-expression with specific drugs,” says Byrd. Thefindings occurred in both human CLL cancer cells and in a relatively new animal model, the TCL1 transgenic mouse, which was developed by Ohio State cancer researcher Carlo Croce, MD, and colleagues in 2002. The TCL1 model was the first animal model for CLL and is being used by many groups to help develop new CLL therapies.

“Our data demonstrate strong similarities in gene-silencing patterns in the mouse leukemia and human CLL,” Byrd says. “We know that human CLL involves the silencing of a number of genes, but we can study it only after patients develop the disease. This mouse model allows us to look at events that lead to the disease and to identify markers for early detection and testing new therapies.”

He says FOXD3 silencing is perhaps “the most exciting finding we have made in the laboratory. We are exploring the efficacy of several therapies that target this co-repressor complex, and we hope that one or more of these will go into the clinic soon.”

Byrd says the body of collaborative, translational work by researchers at Ohio State, as well as at other institutions, is cause for optimism about future therapies for CLL.

“Many of these therapies are directed at targets that are present in leukemia cells and not in normal cells,” he explains. “This assures a very good therapeutic index that allows effective treatment of leukemia in the absence of side effects. That really should get doctors and patients alike very excited about the future.”

Over the past four years, a Leukemia & Lymphoma Society Specialized Center of Research Excellence (SCOR) grant has funded much of the CLL research at the OSUCCC-James. While work under this grant will continue, the NCI recently awarded Ohio State an $11.5-million, five-year Specialized Program of Research Excellence (SPORE) grant that will help some of the cancer program’s top researchers translate basic research findings into better treatments for patients with all types of leukemia.

John Byrd, MD, is program director for the grant, in which three of five projects involve CLL. Clara D. Bloomfield, MD, cancer scholar and senior adviser at the OSUCCC-James, and Guido Marcucci, MD, a leukemia specialist and OSUCCC-James researcher, are co-program directors. Bloomfield and Marcucci also lead the SPORE investigations of acute myeloid leukemia (AML). “This unites the strengths of the major leukemia translational investigators at Ohio State who already work closely on parallel discoveries that benefit patients with AML and CLL,” Byrd says.