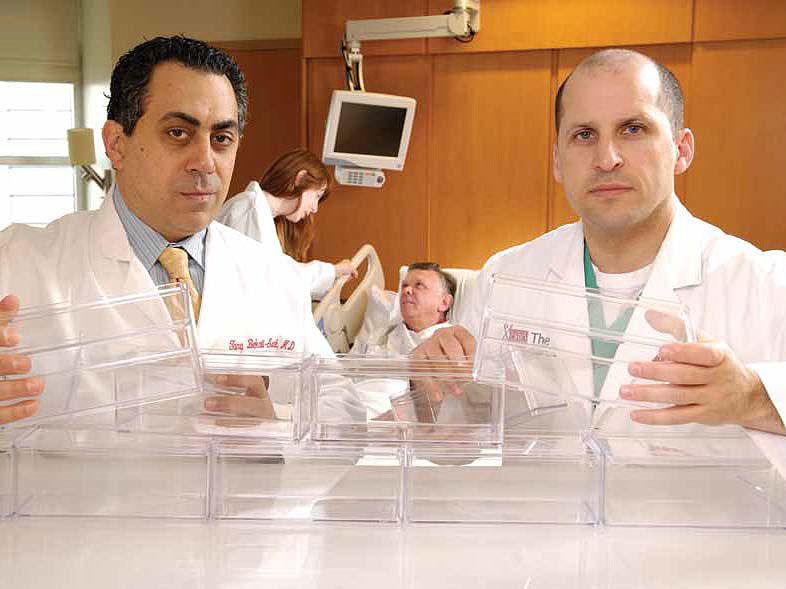 A national “call to action” against pancreatic cancer—one of the world’s deadliest malignancies—is being well-served by an ongoing expansion of the Gastrointestinal (GI) Oncology Program at The Ohio State University.

Driving the expansion is a rising volume of patients with cancer of the pancreas, esophagus, liver and bile duct, malignancies that cry out for more research to foster better therapies.

“Although progress has been made in some gastrointestinal cancers, such as colorectal cancer, very little has been made in others—especially pancreatic, which is the only major cancer with a single-digit five-year survival rate for all stages combined (less than 6 percent),” says Tanios Bekaii-Saab, MD, medical director of the GI Oncology Program at Ohio State’s Comprehensive Cancer Center – James Cancer Hospital and Solove Research Institute (OSUCCC – James).

“With our science-based treatments attracting more patients, along with the need for better therapies to serve our growing caseload, we are recruiting more medical professionals to our multidisciplinary program,” Bekaii-Saab says. He notes that the program will soon move to larger quarters in a new Gastrointestinal Comprehensive Cancer Center near Ohio State’s main campus.

“Our team of GI oncologists, surgeons, radiation oncologists, interventional radiologists and geneticists will be consolidated in one location designed to absorb our growth,” he adds. “We’ll offer the full spectrum of scans, blood draws, chemotherapy and radiation therapy, colonoscopies, upper endoscopies, etc., for treating patients with all forms of GI cancer.


Bekaii-Saab believes the expansion will help the OSUCCC – James take more strides against pancreatic cancer, which is the fourth-leading cause of cancer death in the United States despite ranking 10th in incidence.

The American Cancer Society estimated that more than 43,000 Americans were diagnosed with the disease in 2010 and projected that nearly 37,000 would die from it that year. For those diagnosed in earlier stages, 20-30 percent survive five years, but less than 5 percent survive that long if they have later-stage disease. Most patients are diagnosed in later stages since there is no standard screening method, and symptoms typically do not present until the disease has advanced.

“It usually shows up late, tends to be resistant to current therapies, and often recurs despite surgery and chemotherapy,” Bekaii-Saab says. “In absolute numbers, the incidence and mortality rates are almost the same, which means that almost every patient with pancreatic cancer dies from it, and many die within six months to a year.”

In 2007, the National Cancer Institute (NCI) brought together researchers, clinicians, patient advocates and pharmaceutical industry representatives to produce a consensus report on developing and testing treatments for pancreatic cancer over the next few years. It appeared online on Oct. 26, 2009, in the Journal of Clinical Oncology.

In a subsequent article in the NCI Cancer Bulletin, the report’s lead author, Philip A. Philip, MD, of the Barbara Ann Karmanos Cancer Institute in Detroit, described it as a “call to action” that cites a need for “better clinical trials based on solid science” and for greater patient participation in those studies in order to improve outcomes.

The Bulletin stated that the report recommends designing “pilot studies that test potential treatments in smaller groups before proceeding to the kinds of large trials that have yielded disappointing results in the past.” It also said decisions about molecular targets and potential drugs should be based on scientific evidence that includes preclinical and animal studies that better represent pancreatic cancer in humans. “A challenge,” the article added, “is to develop treatments when knowledge of pancreatic cancer biology is still limited.”

One is a randomized, multi-institutional, phase II study led by Bekaii-Saab to assess progression-free survival in patients with recurrent or metastatic pancreatic cancer who receive the oncolytic virus Reolysin® in combination with standard chemotherapeutic drugs paclitaxel and carboplatin, relative to those who receive paclitaxel and carboplatin alone. The NCI’s Cancer Therapy Evaluation Program (CTEP) is sponsoring the trial, and Oncolytics Biotech Inc. is providing the virus.

Reolysin® is a naturally occurring human reovirus. While reovirus infection in humans is generally mild and limited to the “upper respiratory and gastrointestinal tracts, the virus replicates in, and is cytotoxic to, cells with mutations that activate the RAS gene signaling pathway.

He points out that RAS mutations are found in some 30 percent of all human cancers, including close to 90 percent of pancreatic ductal adenocarcinomas, making the RAS pathway a prime therapeutic target.

“The chemotherapy drugs, combined with the virus, will do two things: help destroy tumor cells and suppress the body’s immune response to the virus, allowing it to reach its target and have its effect,” Bekaii-Saab says.

Seventy patients will be accrued to the study, which also is being conducted at Memorial Sloan-Kettering Cancer Center and at Georgetown University.

In addition, the OSUCCC – James is accruing patients to an NCI-sponsored phase I dose-escalation clinical trial that examines the use of 3-AP (Triapine) plus radiotherapy in patients with unresectable stage III nonmetastatic pancreatic cancer. The goals are to determine the maximum tolerated dose of this agent when used with radiotherapy, and to gauge the therapeutic response rate.

Twenty-four patients will be accrued to this study, which is available only at the OSUCCC – James. “In our first nine patients, we’re already seeing some promising responses that wouldn’t be attributable to the radiation alone,” says Bekaii-Saab, principal investigator.

These two studies are among several clinical trials at the OSUCCC – James designed for patients with all stages of pancreatic cancer.

“We can treat patients along the entire continuum of care, from prior to surgery all the way to second-line treatment in metastatic cancer,” Bekaii-Saab says. “We also have an active basic research program for studying molecular biomarkers, genetic pathways, tumor microenvironment and other biological aspects that may help us better understand, detect and treat this disease.”


An important basic science finding came recently from the lab of Mark Bloomston, MD, a surgical oncologist whose team identified a microRNA profile that could distinguish pancreatic cancer tissue from nearby normal tissue and from chronic pancreatitis. Published in the Journal of the American Medical Association, the finding suggests that microRNAs might help detect this disease sooner and predict how patients will fare.

“Such correlations with survival are lacking in pancreatic cancer,” Bloomston says, noting that this finding was “just a starting point. We and others need to validate the role of these molecules in pancreatic cancer. We’re looking at how the tumor microenvironment interacts with tumor cells to alter the expression of microRNAs.”

Bloomston’s group also is starting a project to test the effectiveness of optical coherence tomography (OCT) for early detection of precancerous pancreatic lesions that previously were difficult to find due to limitations in imaging.

With the aid of an “idea grant” from Pelotonia, an annual grassroots bicycle tour that raises millions of dollars for cancer research at the OSUCCC – James, Bloomston and colleagues will build an OCT device at Ohio State in collaboration with Case Western Reserve University physicist Zhilin Hu, PhD, who developed the technology.

“Optical coherence tomography is an endoscopic procedure,” Bloomston says. “The probe is a fiber that can be inserted into the pancreatic duct to provide 3D images at the microscopic level, allowing detection of abnormal cells not visible with current technology.” He says the OCT device initially will be used in the operating room to image pancreatic tissue removed from patients undergoing surgical resection for suspected precancerous lesions, after which the OCT images will be compared with microscope images.

“Over the two years of this project, we expect to detect occult cancers in six to eight of the 30 to 40 patients who will be having surgery here,” Bloomston says. “Once the reliability of the OCT device is confirmed, we’ll undertake a larger project to presurgically image the pancreas of patients at high risk for pancreatic cancer. We hope eventually to make treatment decisions based on OCT images.”

He adds that the OCT device also will be equipped to deliver radiation, “which opens the possibility for treating precancerous pancreatic lesions without radical surgery – a potentially revolutionary step in early detection and prevention.”


Of vital importance in pancreatic cancer research is the development of promising molecules that may lead to new therapies.

Chen says that an energy restriction-mimetic agent his team recently developed shows a unique ability to downregulate the expression of two enzymes—ribonucleotide reductase and thymidylate synthase—that contribute to chemoresistance to gemcitabine.

Combating the devastating effects of pancreatic cancer, such as cachexia, is another aspect of helping patients with this disease at the OSUCCC – James.

Denis Guttridge, PhD, associate professor of medicine, and his lab study the NF-κB family of transcription factors and their role in cell growth and differentiation. Strong evidence indicates that the NF-κB signaling pathway is also involved in tumor progression and in limiting the ability of skeletal muscle to regenerate, which may be a factor in muscular dystrophy and cancer cachexia.

“Our research on skeletal muscle suggests that NF-κB could be relevant in several wasting disorders,” Guttridge says. “Cachexia is prevalent in aggressive cancers such as those in the GI region, so we’re trying to understand how NF-κB promotes it.

“There is evidence that activating NF-κB in skeletal muscle leads to its breakdown and to muscle loss,” he explains. “Our work with muscular dystrophy shows that, in that disease, NF-κB can inhibit skeletal muscle regeneration. We want to know whether there are common mechanisms in how NF-κB regulates degeneration in muscular dystrophy versus how it may promote muscle wasting in cancer cachexia.”

Guttridge says clinicians have seen pancreatic cancer patients lose up to 20 percent of their body weight due to skeletal muscle degeneration. He points out that weight is a prime predictor of prognosis: Patients who lose a lot are more difficult to treat aggressively with radiation and chemotherapy.

Guttridge and Chen also recently received a Pelotonia “idea grant” to study NF-κB inhibition cancer therapy. They plan to design an agent that targets this protein and that, if successful in preclinical studies, could be developed for treating breast and hematologic malignancies.

“This study will involve cell lines, human tissue and potential mouse models of leukemia and breast cancer,” Guttridge says. “We chose these cancers because we have animal models that are already accepted, and because two of our experts in these disciplines—Gustavo Leone, PhD, and John Byrd, MD—can critically analyze the results for us.”

He says the agent could later be applied to other cancers, including pancreatic.


Despite what Bekaii-Saab calls a historically “pathetic and baffling” lack of research funding for pancreatic cancer compared with other cancers, he believes the NCI “call to action” will help.

“Work being done now by us and others suggests there are ways to break through the therapeutic barriers,” he says. “At Ohio State and other academic medical centers we have the advantage of multidisciplinary care backed by the presence of multiple clinical trials. As more programs around the nation become similarly comprehensive, I believe we’ll get to a day when this cancer is as treatable as some other forms are now.”

From a research standpoint, we can learn here from every patient, and we have clinical trials for patients at every stage of this disease,” Bloomston adds. “We are starting to see longer survival periods. In my career, I’ve gone from seeing patients typically survive less than a year to many who are living two to four years—not necessarily cured, but living longer with a good quality of life. And that’s the first step.”