Physician-Researcher Finds Much to Enjoy in Annual Pelotonia Ride 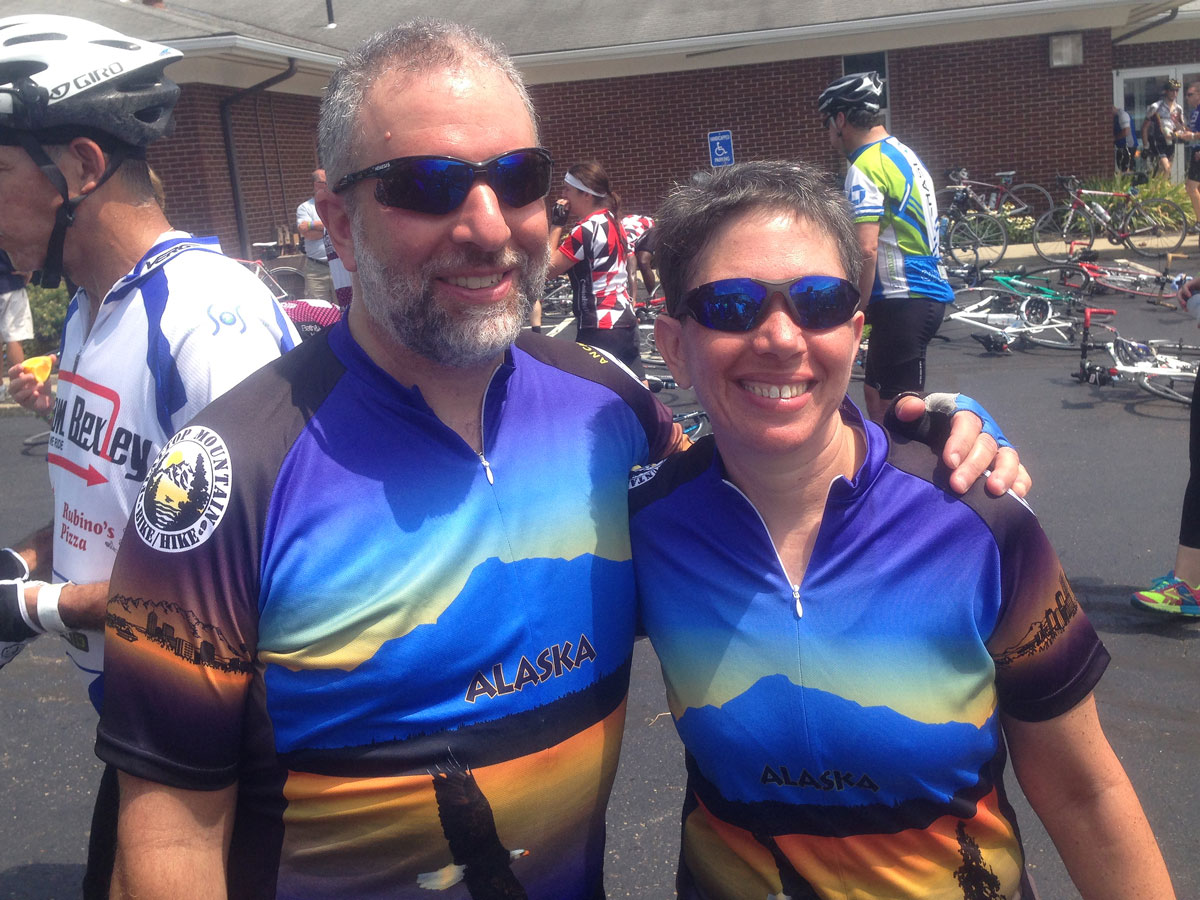 There are many things that Lawrence Kirschner, MD, PhD, likes about training for and riding in Pelotonia.

One is the chance it has given him to get back into bike riding—which he greatly enjoyed as a teen back in New Jersey—and to pursue the rigorous but worthwhile challenge of riding 100 miles each year to support cancer research at Ohio State.

Another, he says, is “the feel of the wind through my thinning hair and of bugs going splat on my sunglasses.”

He also likes training and riding with Evelyn, his wife of more than 25 years, who has joined him for the past two years as a member of the OSU Surgical Oncology and Friends Peloton (riding group), a part of Team Buckeye—Ohio State’s official superpeloton.

“I’ve ridden in Pelotonia since its inception in 2009, and after watching me train for four years, Evelyn jumped in the boat for Pelotonia 13, so we do almost all of our training together,” says Kirschner, a professor in the Division of Endocrinology, Diabetes and Metabolism at Ohio State, and a member of the Molecular Biology and Cancer Genetics Program at the OSUCCC – James.

“I had no doubt she would finish the 100 miles her first year because, like me, she is too stubborn to give up,” he says of Evelyn, a high school math teacher. “She is a beast on the uphills, at least the short ones. It’s amazing how similar our paces are on the bikes, so riding together has definitely brought us closer.”

But the thing that really excites Kirschner about Pelotonia is the tremendous sense of community it fosters.

“The connection between riders from all walks of life is phenomenally uplifting,” he says. “If I’m riding with a group, I’ll often strike up a conversation with a rider next to me—everyone has an interesting story.

“Of course, that is in addition to the gratification I feel when I ride past a spectator or family whose lives have been touched by cancer and I can see their gratitude, or hear it in the ringing of cowbells.”

Although he knows he’ll never meet most of those spectators, he feels the same connection with them that he has to his own patients. As a clinical endocrinologist, Kirschner treats people with adrenal, pituitary or thyroid tumors. He also spends much time running a research lab focused on understanding the molecular basis of a rare inherited tumor syndrome that involves the endocrine glands, particularly the adrenals, pituitary and thyroid.

“We know the gene, but we’re still trying to figure out the details of how it causes tumors,” Kirschner says. “Right now our research is focused mostly on thyroid cancer because there are a number of other terrific researchers at OSU who work in this area, giving us a great collaborative group.”

Kirschner’s lab team has benefited directly from Pelotonia funds. “One of my former PhD students, Daphne Pringle, was supported by a Pelotonia grant,” he explains. “She was the major driver of some of our thyroid cancer studies in the past.” Pringle, who rode in two Pelotonias, is now conducting postdoctoral studies of melanoma and lung cancer at the University of California at San Francisco.

Kirschner and his wife, who have three young-adult children, have been training for Pelotonia 15 since the onset of warmer weather and are eager for this year’s event.

“We intend to keep riding for as long as the tour runs,” he says. “Although my immediate family has had the good fortune to not be affected by cancer, my mother-in-law is a breast cancer survivor, and my uncle and cousin both died of an inherited colon cancer syndrome, giving cancer a strong personal relevance.”

Each year when he starts his Pelotonia ride, Kirschner also recalls the patients he has known who have died of cancer.

“It makes me count myself lucky and gives me motivation,” he says, adding that Pelotonia “always reminds me of how far we’ve come in cancer research, but also how far we still have to go.”