A Ride Replete With Reflection 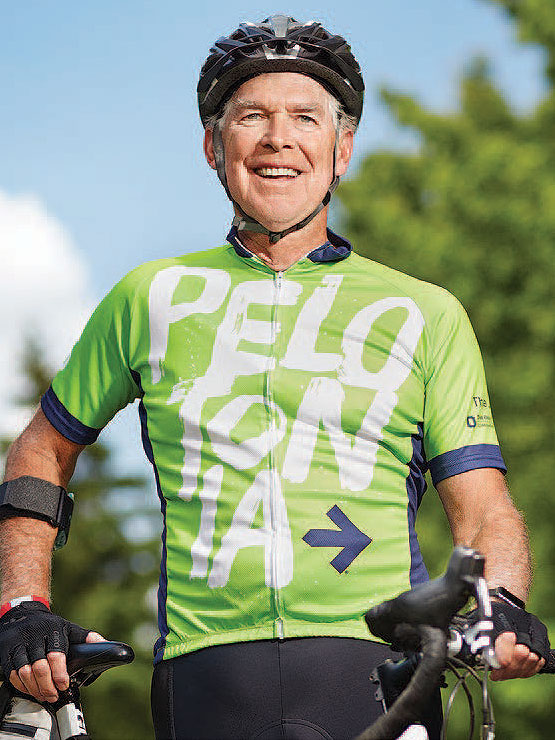 The only time Kent Rinker thinks about surviving cancer is during his annual Pelotonia ride. He also thinks about his father and several friends who had cancer but were “not as lucky and are no longer with us.”

“That is why this ride is so emotional for me,” says Rinker, 68. “The fact that I can ride with my family makes it a special day as well.

“The distance I choose to ride might be difficult, but it is nothing compared to what cancer patients deal with daily.”

Rinker, a retired public mutual fund manager with Diamond Hill Capital Management, began riding in Pelotonia in 2010 after being encouraged by a younger colleague and active cyclist at Diamond Hill who had ridden in the 2009 inaugural Pelotonia.

Rinker and his wife Nancy, daughters Julie and Kelly, son Nick, daughter-in-law Jessie and son-in-law Tom have all ridden as part of the Diamond Hill peloton (Julie also works there).

“I have been hooked ever since my first ride,” he says, noting that he and Julie have since ridden 100 miles together four times; last year they rode 75 again, mainly because he was suffering from a bad left knee. Although his knee still troubles him, he plans to once again ride 100 miles this year, accompanied by his daughter Julie, his son and their spouses.

Rinker learned 10 years ago that he had prostate cancer while in Florida. Severe pain in his groin sent him to an emergency room. Later, a urologist, suggested a biopsy that detected cancer. Rinker then sought opinions from urologists at other locations, including The James.

Eventually he had his prostate removed via robotic surgery. He required no follow-up therapy, and he has had no recurrences.

“I always felt and hoped that I would be cancer-free,” he says. “I was optimistic and never depressed. I treated the news as if it were a small bump in the road of my life. Fortunately, that’s all it was, and my wife, family and friends were very supportive.”

He feels lucky to be a survivor but doesn’t dwell on it. Rather, he thinks of others, such as a man on another continent for whom he became a bone marrow donor some 20 years ago. Rinker went to The James for the donation procedure, which he says “could not have gone better.”

Rinker wished to contact the recipient and, following donation confidentiality policies, he did so after a one-year waiting period. The two have kept in touch; Rinker plans to visit the recipient next year.

In addition, Rinker and his family think of a niece who was diagnosed with a rare cancer called eiomyosarcoma. When the Rinkers inquired
about research funding for this disease, retired James Director Emeritus David Schuller, MD, introduced them to Raphael Pollock, MD, PhD, a sarcoma specialist who had been recruited from MD Anderson Cancer Center to Ohio State with the support of Pelotonia funds to aid his research.

“A driving factor in his decision to come here was research dollars raised by Pelotonia,” Rinker says. “This doctor is one of the best in the world, and he is here because of Pelotonia and the work being done at The James.

“Unfortunately,” he adds, “our niece died last December. We will continue to ride in her honor.”