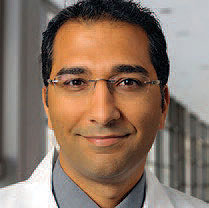 A technology called flow cytometry has been a mainstay of cancer research for decades. It tells researchers what type of cells they are looking at.

The method uses antibodies that bind with certain molecules that might be on or inside cells. Each of the antibodies emits a certain color of light when exposed to a laser beam. The cells are run through a flow-cytometer, which counts cells based on the colors of light they emit.

But the technique has limitations. “When using multiple antibodies, the colors bleed into one another, making it hard to label even 10 molecules in cells,” says OSUCCC – James researcher Gregory Behbehani, MD, PhD, assistant professor of Medicine in the Division of Hematology.

Fortunately, Pelotonia funds have enabled Ohio State’s cancer program to purchase a mass cytometer, a state-of-the-art instrument that identifies and sorts cells without relying on light.

In mass cytometry, the same antibodies are again used to identify telltale molecules on cells, but the antibodies are linked to heavy metals that are never present in cells.

The instrument vaporizes the cells into clouds of ionized atoms and then separates the metal ions that were attached to the antibodies bound to the cells according their molecular weight. This separation can be performed at very high resolution, allowing the presence of the antibodies to be detected and eliminating the problem of color overlap. “The new system allows us to measure 30 to 50 molecules on cells,” Behbehani says.

He has already used the instrument to study why some people with a subtype of acute myeloid leukemia (AML) called core-binding factor AML are cured with chemotherapy, while people with an AML subtype that features a mutation called FLT3 ITD are not.

The 2015 study was published in the journal Cancer Discovery, with a commentary. Among its many findings, it showed that in patients with leukemia subtypes that are typically curable, 7-8 percent of leukemia precursor cells are undergoing cell division at any one time, which would make them sensitive to chemotherapy

But only about 0.5 percent oft hose progenitor cells are dividing at any one time in patients with FLT3 ITD mutations. “So those cells are growing very slowly, making them much less sensitive to chemotherapy,” Behbehani says. “Patients with this leukemia subtype go into remission, but their disease usually relapses, making it very difficult to cure.

“In the future,” he says, “we hope to use instruments like this one to further personalize treatments and cure more patients.”