Pathology From the Cockpit 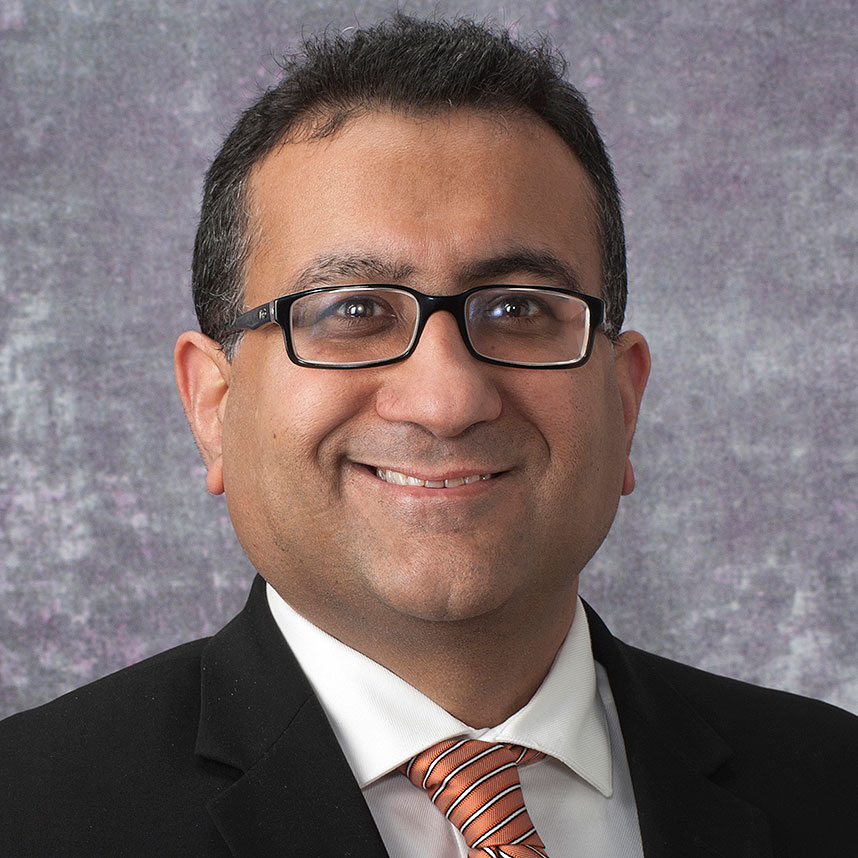 Until recently, when a pathologist wanted to review the prior slides from a complex case with an expert pathologist or colleague, he or she had to request the glass slides from the archives and wait hours to days for the slides to arrive so that they could be shared. But that is changing at Ohio State.

The new system will enable OSUCCC – James pathologists to sit at a large viewer and, with a few clicks, call up a patient’s digitized and annotated biopsy specimens, along with his or her medical record, complete with molecular biomarker tests and genomic data.

The program uses whole-slide imaging (WSI) technology, which scans entire glass pathology slides and converts them into digital images. “With that technology, a computer becomes a microscope,” says Anil Parwani, MD, PhD, MBA, who heads the program as director of Digital Pathology at the OSUCCC – James.

The system provides fully automated end-to-end pathology workflow and a bank of ultra-fast scanners that are used to digitize both current and past glass pathology slides.

WSI technology was introduced in the early 1990s, but the images were low quality, enormous in size and slow to upload. Pathologists were skeptical; they could work more quickly and accurately by viewing their slides directly.

By the 2000s, the technology had improved, and desktop computers could accommodate large image files. Universities began using digital slides for teaching and research.

The digital images were easily stored and transferred—no more hunting down archived glass slides only to find that a slide was lost, broken or faded. What’s more, multiple people could simultaneously analyze digital slides from anywhere, vastly speeding up consultations. Their use became more widespread.

But could digital slides be used for the primary diagnosis of cancer and other diseases? In 2009, the U.S. Food and Drug Administration categorized WSI scanners as Class III in vitro diagnostic devices, indicating a high risk that a misdiagnosis could be associated with high morbidity or mortality. A leading question was whether information was lost when a glass slide was converted to a digital image.

Other hurdles remain, also. “Digital pathology in the clinical arena is still in its infancy,” Parwani says.

For example, different WSI scanners use different image formats, making transfers between systems difficult. Parwani says the field should choose a standard format like the DICOM standard used for digital radiology images. And, he says, his generation of pathologists remains reluctant to adopt a technology that was not mature when they first tested it nearly 20 years ago. They are wary of the time and cost required to convert to digital pathology and scan thousands of old slides. 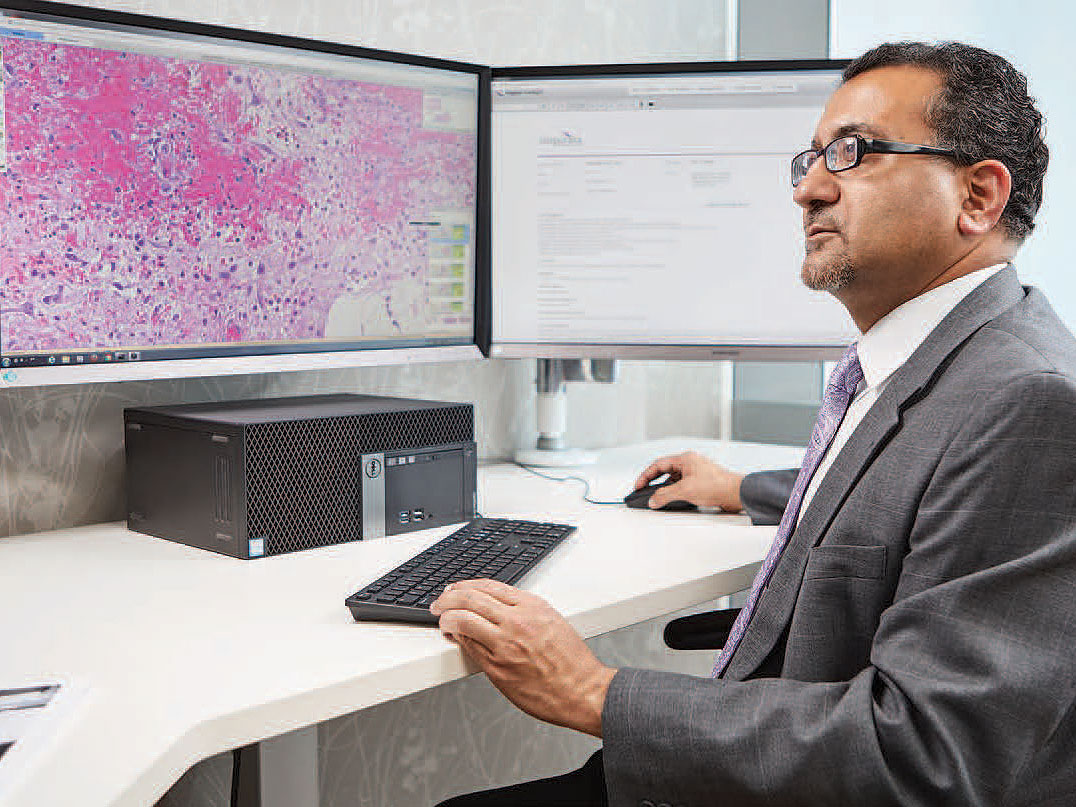 “In reality, the technology is very good now, the images move seamlessly and viewing them is much like viewing an image on your iPhone,” he says. Parwani recalls a senior pathologist at another center who thought that digital pathology would slow her down, but he persuaded her to give the technology another try. “She fell in love with it. She was consulting on difficult cases from China, and she got really excited. It extended her spectrum of things that she might not have otherwise seen.”

Since his recruitment from the University of Pittsburgh in 2016, Parwani has created that same excitement at the OSUCCC – James. “We brought in Anil as someone already experienced who could lead the OSUCCC – James into this vital space,” says Wendy Frankel, MD, professor and chair of Pathology at The Ohio State University Wexner Medical Center.

Parwani highlights three major advantages in adopting digital pathology. First is efficient information management. He estimates that pathologists spend 10-15 percent of their time manually managing cases, matching paperwork to patient slides or finding prior samples from a patient and ordering those slides from storage.

“Once a slide is digitized, the image has a barcode that stores all of the patient’s information, and it will be integrated into our information systems,” he says. “This puts all the material associated with a particular patient at my fingertips.”

This idea has been referred to as the “digital pathology cockpit,” with a patient’s electronic medical record, including molecular data on biomarkers and gene sequencing, attached to the digitized slides. Ease of image sharing is another advantage to digital pathology. Pathologists have long sent photomicrographs to colleagues, but they provide only a limited view of a sample. Entire digital slides, on the other hand, can be easily emailed to colleagues anywhere.

Freeing the image from a physical slide also means that multiple people can simultaneously review an image for quality assurance checks, training students, quick consultations, tumor-board presentations and collaborating on research. “You are more likely to get a second opinion on something if it’s easy to do,” notes Parwani, who says it takes about a week to ship glass slides to colleagues in other states.

“As a comprehensive cancer center and an academic medical center, we can use digital pathology to bring our expertise to others in an efficient way,” says Kris Kipp, MSN, RN, executive director, patient services and chief nursing officer at the OSUCCC – James.

He explains that it may one day allow smaller or more rural hospitals to submit images for second opinions or even primary diagnoses. It will also facilitate referrals from other parts of the region or the country. “We can’t see patients here until we have their previous radiology images and pathology slides,” says Kipp. “By digitizing slides, we’ll receive that information more quickly and see patients sooner.”

Or, such analysis could quantitate an immunostained cancer marker such as HER2 for breast cancer more objectively than a pathologist.

“The computer can more quickly and efficiently quantitate rare events such as mitoses or positive nuclei that are larger than a particular size, or identify areas that are chaotic and disordered,” says Parwani. “Digital pathology enables me to spend more time as a physician making diagnoses and frees me from counting cells, chasing paperwork and other tedious tasks.”

Eventually, says Kipp, autodiagnosing algorithms might be developed using sets of digitized slides of, say, hundreds of samples of a type of breast cancer. These algorithms could then be used to do a first-pass screening of patient slides to generate preliminary diagnoses, which would be confirmed by a pathologist.

The success of digital pathology ultimately depends on how well WSI scanners, image storage, image analysis tools and information systems are integrated. And, of course, on how well pathologists adopt these technologies. At Ohio State, their training begins with the Digital Pathology InnovationC enter, which houses a training cockpit.

“We’re creating a Digital Pathology Center that at its core will create an end-to-end digital pathology solution for primary diagnosis, research, education, consultations and all aspects of pathology,” says Parwani. It’s year one of a 10-year project, and OSUCCC – James pathologists are already sending slides with frozen sections and fine-needle aspirate samples to the Digital Pathology scanning center.

“Digital pathology is a very innovative way to go,” Frankel says. “It has the potential to change how pathology is practiced in clinicalc are, teaching and research, and it can help us as an academic medical center with all three of those missions.”

She points out that digitized slides are more easily annotated for diagnostic and research purposes, and more easily archived and accessed than glass slides. The images also can be merged with other patient and outcome data to guide prognosis and treatment.

“Digital pathology cannot replace pathologists,” Frankel stresses, “but it can help us do our jobs better.”

That includes improving the quality of patient care by providing more timely diagnoses, and it ultimately may improve how physicians assess a patient’s prognosis and treatment, she says. “Digital pathology can promote precision cancer medicine by helping us make the right diagnosis for the right patient at the right time.”