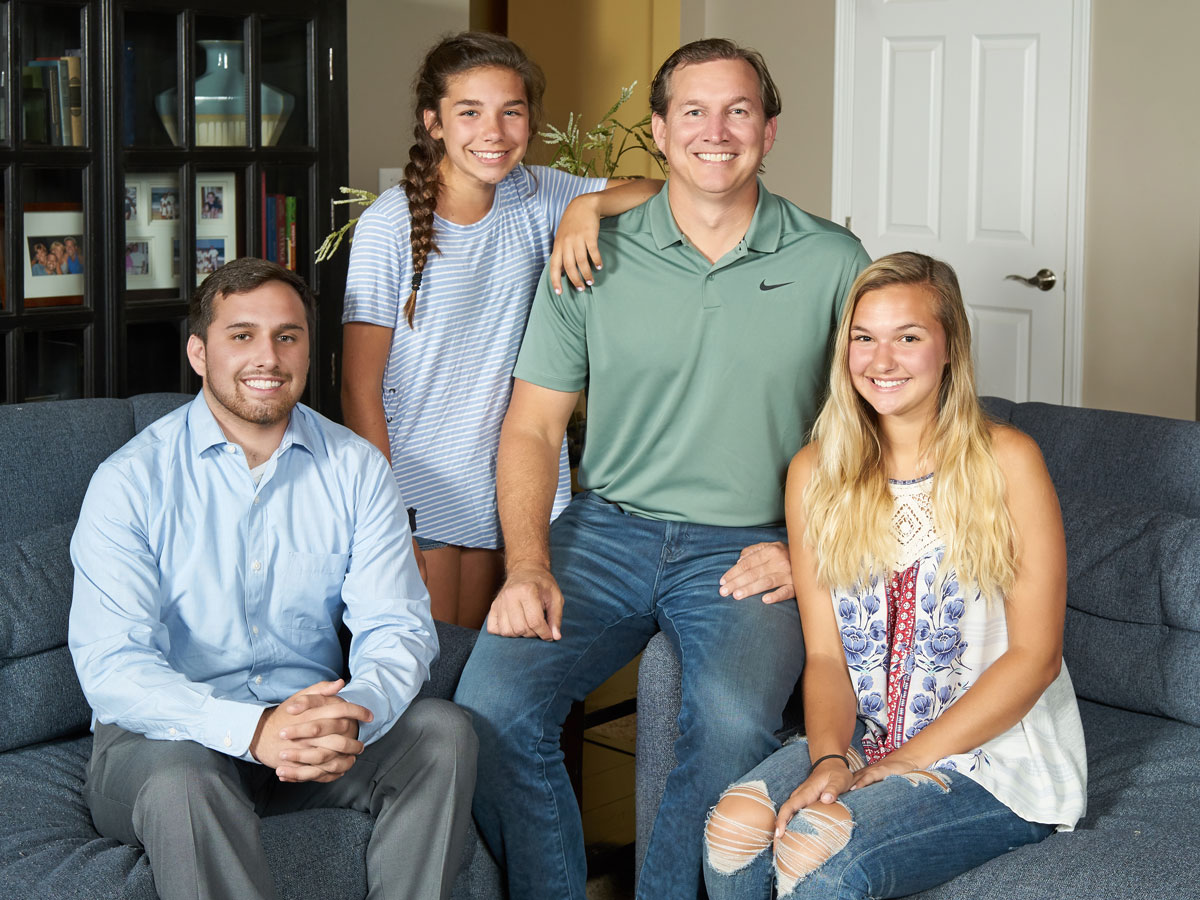 Cindy Smullen had an infectious laugh that filled the Worthington home she shared with husband Greg and children Jake, 20, Abby, 17, and Emme, 13, with warmth. She was a stay-at-home mother and wife who made the behind-the-scenes work look effortless—the type of mom who’d greet the kids after school with a snack and listening ear, the kind of wife who insisted on one last Cancun vacation the week before dying of breast cancer at age 46.

“Obviously, she was the greatest—the greatest wife, mother, daughter, sister and friend,” says Greg, emotion in his voice. “Her favorite role in life was that of mom to Jake, Abby and Emme. These three were her everything, and she was their everything.” At times, that meant protecting the kids from the darker moments she experienced with cancer. “She did a very good job of separating what she was going through and making others feel comfortable. She tried to protect everybody.”

Even though Cindy avoided the spotlight, preferring to deal with her cancer privately while quietly counseling others who received similar diagnoses, Greg is certain of one thing: She would be incredibly proud of the fundraising the family has carried on in her name. And given the stellar treatment she received from The Ohio State University Comprehensive Cancer Center – James Cancer Hospital and Solove Research Institute (OSUCCC – James) for nearly a decade until her passing in June 2016, without a doubt she would be pleased that the family’s fundraising continues to benefit breast cancer research at the OSUCCC – James.

“This community comes together”

The family’s fundraising efforts began in 2008, just a year after Cindy’s diagnosis. “Cindy never wanted to be a face of breast cancer,” says Greg. “As a breast cancer husband, there’s not much you can do but be there for your spouse. It was a release for me to do something.”

Drawing on both Greg and Cindy’s longtime roots in the Worthington community, they raised philanthropic dollars for the OSUCCC – James while having fun with a wide network of family and friends. “This is about the Worthington community. This community comes together when there’s tragedy or someone is sick,” says Greg, who often takes calls from neighbors or acquaintances seeking advice on how to support a spouse with cancer. “People are apologetic, saying, ‘Sorry to be bringing this up.’ I say, ‘No, don’t be sorry.’ I love being able to be there for others who are going through this.”

And be there for others, the Smullens will. Following Cindy’s death, the family created their own endowment fund with the OSUCCC – James using the proceeds from the fundraisers they continue to hold each year. With endowments, the principal of the gift is invested and only the interest is spent, enabling support to continue in perpetuity. The Smullen Family Fund for Breast Cancer Research recently crossed the $50,000 mark to reach full funding, meaning it will begin to generate continuous income—a lasting reminder of the woman who inspired a family to become philanthropists.

Rivals Rally Around a Cause

The Smullen children, having seen the impact philanthropy can have firsthand, are getting into the act as well. During Jake’s senior year of high school, he and a date raised approximately $3,000 for breast cancer research through a winter formal competition at school; now a busy junior studying finance and business analytics at Ohio University, he plans to take up the mantle of fundraising to honor his mother’s journey after graduation.

Abby, a recent graduate of Worthington Kilbourne High School and now a first-year student at Miami University, created a lacrosse fundraiser this past year with rival Thomas Worthington High School. She coordinated with her athletic director and coach, as well as Thomas Worthington’s lacrosse team captain, Julia Geiger, to pull off a first-ever girls’ lacrosse rival game for charity. When all was said and done, Abby, her teammates, classmates and friends—as well as enthusiastic supporters from Thomas Worthington—raised $4,500 for the Smullen Family Fund for Breast Cancer Research by selling shirts specially designed for the game.

“It was really cool to see Thomas girls, who had no idea who I was, selling shirts,” says Abby. “It’s easy to get the girls who know and respect you, who knew your mom, to help. But I didn’t know many of the girls at Thomas.”

Her proud father concurs. “As much as they are rivals on the field and in social media, when something happens they come together. Both teams warmed up together wearing the shirts, and it was probably the most attended game I’ve seen in four years. The stands were full.”

The plans are for the rivalry game for charity to become an annual tradition. With younger sister Emme, a student at McCord Middle School, also playing lacrosse, there is a good chance the Smullens will continue this connection for years to come.

Greg is quick to point out that the Smullen Family Fund for Breast Cancer Research is only at the beginning of what he hopes it can accomplish. With his children’s continued involvement and desire to see it flourish, and with the fund’s increasing recognition as a charity worthy of support in Worthington, there is no limit to the impact the Smullen family can have.

Though the hope is that the fund will impact many lives through breast cancer research breakthroughs, the family’s resolve remains personal. “My goal is to not let people forget Cindy,” says Greg. “If we keep the fund going, we keep her memory going.”