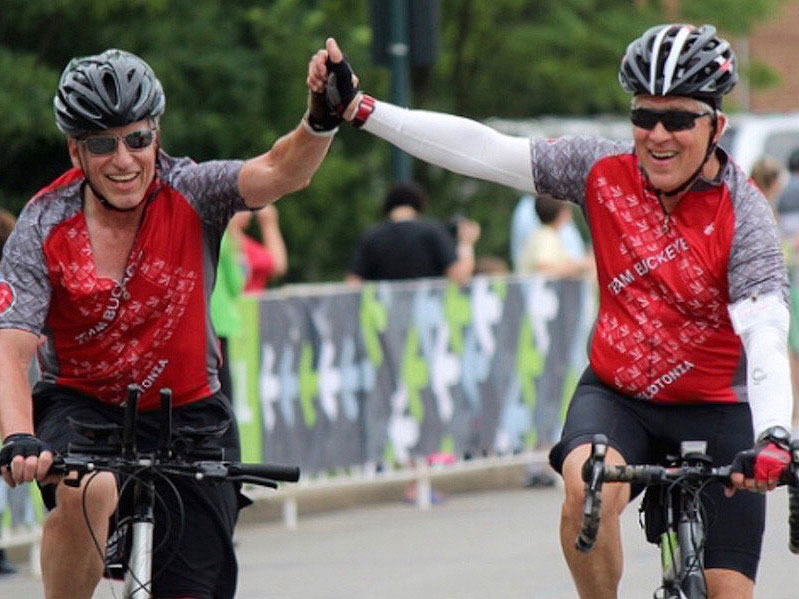 When Robert Bowen, now 68, of Huntington, W. Va., went for a colon cancer screening in February 2013, the last thing he expected was to receive a leukemia diagnosis.

Doctors wanted to start him on chemotherapy in short order. Bowen and his family, however, were concerned about the long-term effects of this treatment approach and asked for a second opinion. His local oncologist referred him to The Ohio State University Comprehensive Cancer Center – James Cancer Hospital and Solove Research Institute (OSUCCC – James).

Testing at both the OSUCCC – James and the Cleveland Clinic suggested his cancer, chronic lymphocytic leukemia (CLL), was slow growing and may not require immediate treatment. The doctors suggested a watch-and-wait approach, with regular monitoring via bloodwork and imaging.

About 18 months later, however, Bowen’s lymph nodes began swelling throughout his body. Tests confirmed the disease had accelerated rapidly, and he could no longer delay treatment.

“I was really down in the dumps. I didn’t feel like I had any choice but to go on chemotherapy. I had a follow-up appointment at Ohio State. My wife and I decided to wait and check in with the team one more time before we made a choice about treatment,” he recalls.

That decision ended up being a game-changer, because he qualified for a clinical trial testing a new oral drug called acalabrutinib. The drug is a second-generation Bruton’s tyrosine kinase (BTK) inhibitor, a newer class of drugs shown to improve the survival of patients with CLL and mantle cell lymphoma (MCL). All preclinical research and the first phase I study of the drug were completed by a team of researchers led by John C. Byrd, MD, at the OSUCCC – James.

“I will never forget it, because Dr. Byrd said, ‘You know you are a candidate for our trial?’ It was so nonchalant, but it meant I had another option,” Bowen says. He started the trial a week later, in December 2014. Within a few days, his lymph nodes had visibly shrunk. Follow-up tests over the next year showed his cancer still responding to treatment. He has remained on the twice-a-day oral therapy for three years with limited side effects.

Cycling as a Mission

Before his cancer diagnosis, Bowen enjoyed cycling as a casual pastime, but afterward it became much more to him.

“My bicycle became a barometer for my health. I could feel myself getting stronger. Before my diagnosis, I enjoyed riding, but after, it became my mission,” he recalls.

In 2015, he participated in Pelotonia, an annual grassroots cycling event that raises money for cancer research at the OSUCCC – James, by joining the Pelotonia Team Buckeye-Hope Highway team and riding 100 miles in the event. He recalls standing at the starting line at 6 a.m., feeling awestruck and humbled by the number of people there to raise money for cancer research.

“I was randomly snapping pictures of the crowd and accidentally took a full-face photo of a specific man. Later, I ran into that same man coincidentally on the route, and we chatted for about an hour before parting ways,” he says.

It felt like more than a coincidence to Bowen the next year when the same man—Thomas Rogers, a five-year Pelotonia rider—rolled up next to him during Pelotonia 16. They decided to stay in touch and made plans to ride together in 2017.

“Tom joked that if we rode together, I had to do the whole thing. So that year I rode the 180,” Bowen says.

Bowen raised more than $3,000 in Pelotonia 17 and says he will continue to ride every year for as long as he is able.