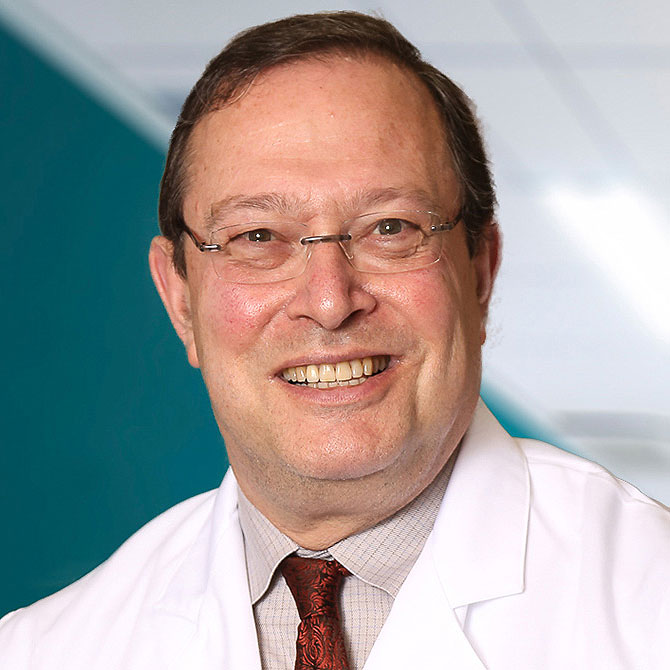 Months after Raphael Pollock, MD, PhD, moved into his new office, it is still filled with boxes he hasn’t had time to unpack. Text messages and emails arrive at a fast and furious pace, and by the time he finishes one meeting, he’s a few minutes late for the next.

Nevertheless, the calm, kind, confident and humble Pollock is thriving as director of The Ohio State University Comprehensive Cancer Center (OSUCCC). “This is what revs my engine,” he says. “I’m excited.”

Pollock has been treating cancer patients for 35 years as a surgeon specializing in soft tissue sarcomas while also breaking new ground as a research scientist. He most recently served as the primary investigator for one of the first large-scale research collaborations between multiple cancer centers funded by the National Cancer Institute (NCI).

“It’s ultimately all about caring for patients,” he says. “My new position provides a bigger platform to do that, and being part of this amazing team of committed caregivers and investigators is a remarkably positive experience.”

Pollock was recently diagnosed with cancer and says the experience has brought him even closer to his patients.

Pollock grew up in Chicago, where his father, George Pollock, MD, PhD, was a prominent psychiatrist who inspired three of his five children to choose medicine as a career.

Raphael Pollock majored in history at Oberlin College, then attended Saint Louis University School of Medicine. “I saw how remarkable the surgeons were in taking care of their patients, and I fell in love with it,” Pollock says of his third-year medical school surgical rotation.

Pollock completed his surgical residency at the University of Chicago and Rush Medical School. Then a surgical oncology fellowship at MD Anderson Cancer Center in Houston connected him with a specialization in sarcomas, a type of cancer that develops in the bones and in soft tissues such as muscles, nerves and blood vessels. His initial rotation as a fellow at MD Anderson was with the sarcoma medical oncology team—a life-changing moment that Pollock remembers well.

The team encountered a young patient with a sarcoma in his humerus (upper arm bone), which had fractured. When the attending physician asked the fellows for recommendations, Pollock said radical amputation had been the proper procedure in a similar case he’d seen less than a week before, while he was still a resident.

But instead of an amputation, the patient underwent chemotherapy, radiation and then surgery, which included the replacement of his shoulder joint. “By the end of the summer, he was playing tennis again,” Pollock says.

This jump-started Pollock’s career for specializing in soft tissue sarcoma—a rare disease that accounts for about 1 percent of all solid tumor diagnoses.

Pollock’s research career also began during his surgical oncology fellowship at MD Anderson. “The NCI launched a new research training program in the early 1980s—the K08 Clinician-Investigator Award series,” Pollock says. “I was lucky enough to receive one of these early awards and chose to enroll in a PhD program in tumor immunology at the Graduate School of Biomedical Biological Sciences in Houston.”

He spent the next 10 years studying the impact of surgery on perioperative antitumor immunity mediated by natural killer (NK) cells, a subset of circulating lymphocytes within the immune system. However, it was difficult to show that NK cells had a role against soft tissue sarcomas, given the research methodologies available at that time.

“I was encouraged by several senior scientists at MD Anderson to begin examining the molecular drivers underlying sarcoma proliferation and metastasis, and this led to a new series of translational laboratory investigations focusing on molecularly oriented sarcoma research,” says Pollock. “This has been the focus of our laboratory ever since.”

Pollock came to Ohio State in 2013 after 31 years at MD Anderson, where he served as professor and head of surgery for 17 years. At Ohio State, Pollock has served in several leadership roles: vice chair for clinical affairs in the Department of Surgery; director of the Division of Surgical Oncology; director of the Sarcoma Research Laboratory; surgeon-in-chief for the OSUCCC – James and surgeon-in-chief for The Ohio State University Health System. He also holds the Klotz Family Chair in Cancer Research.

As director of the OSUCCC, Pollock will devote his efforts to “the critical task of supporting the entire research effort at one of the largest and best cancer centers,” he says. “The breadth, quality and collaborative interest of the research here is as strong as you’ll find anywhere.”

Pollock himself has benefited from some of this research. In January 2017, he was diagnosed with chronic lymphocytic leukemia (CLL). John C. Byrd, MD, co-leader of the Leukemia Research Program at the OSUCCC, is one of the world’s leading experts on CLL. He and his research team played a large role in developing ibrutinib, an FDA-approved drug and a game-changing improvement for treating certain CLL patients.

“I’m very lucky to be in the right place,” says Pollock, who takes ibrutinib daily. “I am so grateful to John and his colleagues for their compassion and knowledge.”

Pollock is “cautiously optimistic” about his long-term prognosis.

“It has added a little spice to this whole proposition,” he says. “And because there’s some uncertainty, it has also added a sense of urgency. I’m even more determined to create opportunities for all the amazing people here that will hopefully translate into even better care for our patients.”