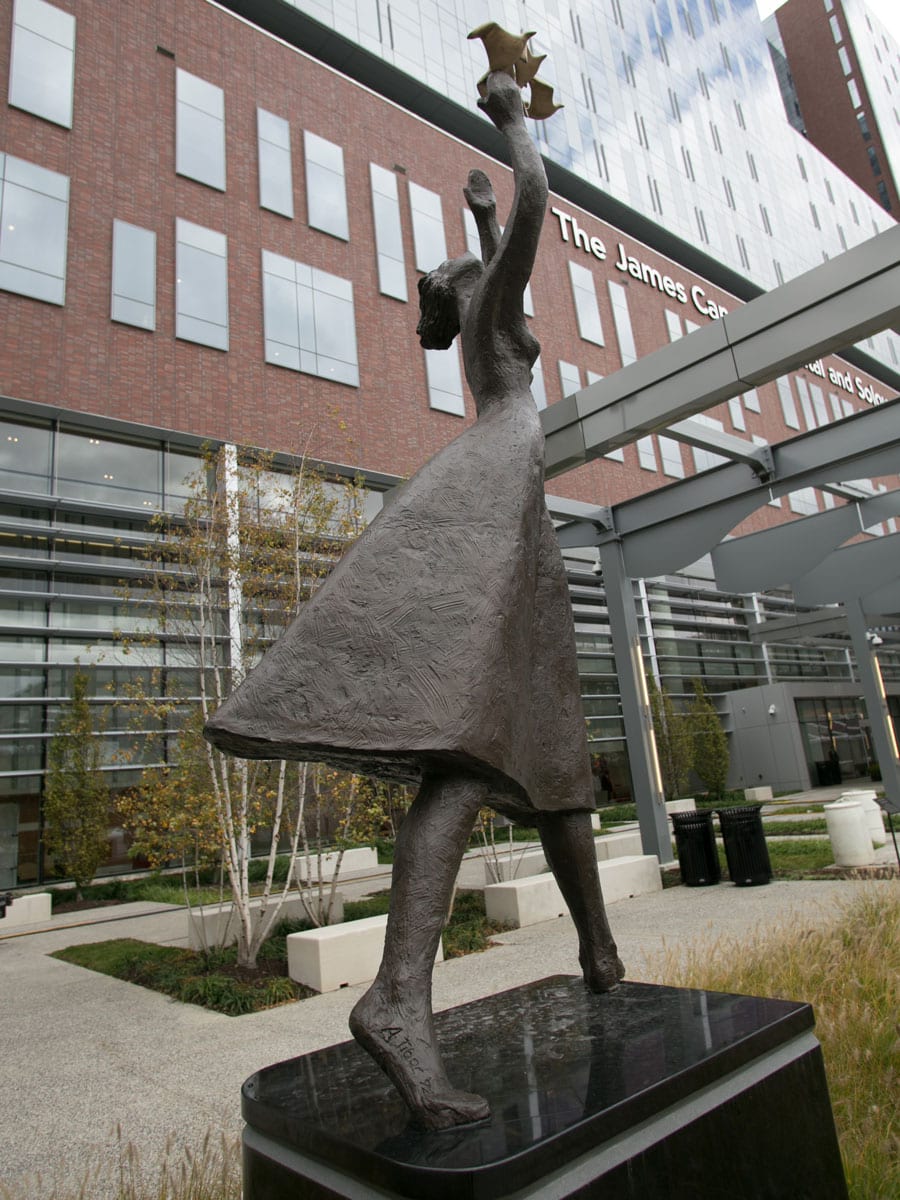 When Arthur G. James, MD, sought a meaningful piece of art to welcome patients, families and caregivers to Ohio State’s original cancer hospital, which had been named in his honor before opening in 1990, he turned to an artist whose subjects deal with life’s experiences and evoke human emotion.

Renowned sculptor Alfred Tibor, who was born in Hungary in 1920 but fled with his family to America and freedom in 1957, believes his life was spared during the horrors of the Holocaust—which for him included six years of captivity in a Siberian prison camp—“to do work so people may enjoy it.” After Dr. James viewed the artist’s work at an outdoor exhibit in Columbus, he invited him to visit The James and commissioned him to create a sculpture that would inspire and encourage all who see it.

The result was a 13-foot bronze “Statue of Hope” that was dedicated in July 1993 on the front lawn of the original James in a ceremony attended by some 1,200 guests, including nearly 900 cancer survivors. The statue, which was funded through a gift from Bernard R. and Florine C. Ruben, depicts a woman releasing three birds that represent man, woman and child. The woman, who came to be known as “Hope,” and the birds, which Mr. Tibor described as free, flying and healthy, reflect optimism about a tomorrow without pain, sadness or fear.

“As a survivor of a great many hardships in my life, I never lost faith and I never gave up hope that tomorrow would bring a better, brighter and more beautiful future for all,” states Mr. Tibor in words inscribed on the statue’s granite base.

In the weeks before Ohio State’s new 21-story, 306-bed James Cancer Hospital and Solove Research Institute opened in December 2014, the Statue of Hope was removed from its original location, refurbished via another gift from the Ruben family, and erected on the west side of the forecourt in front of the new hospital, where it continues to inspire patients, families and caregivers.

The statue will be rededicated in a May 12, 2015, ceremony that will also include the dedication of the surrounding green space as The Phyllis Kaldor Hope Garden in honor of the late Phyllis Kaldor, MS, RN, OCN, a colleague and friend to all who knew and worked with her at The James and Ohio State’s Wexner Medical Center. She began her career with the medical center in 1976 and became the first director of oncology nursing at The James, where she served in diverse administrative nursing roles before losing her battle with cancer in 2013.

Get Your Medical Records

Get Your Medical Bills

Pay Your Bill Online with MyChart