An Unknown Illness, An Uncertain Future, An Unbreakable Spirit: A Journey Through Young Adult Cancer 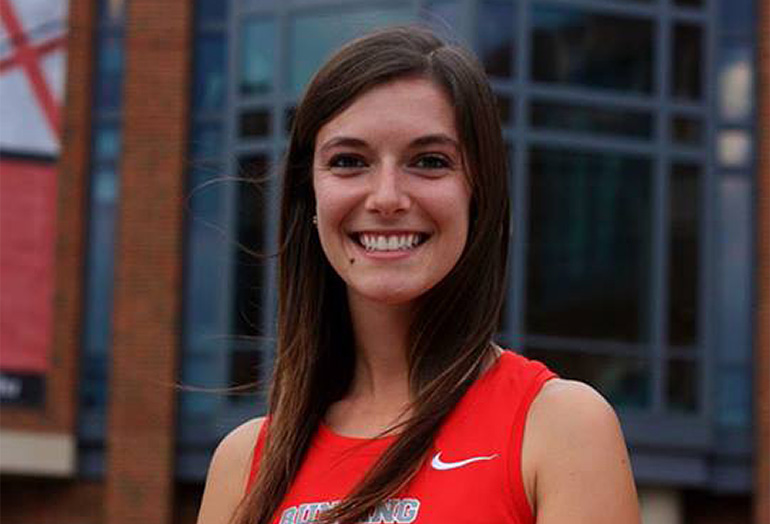 Before Erica Mantell could start her journey of survival, she needed to know what was wrong.

Entering her senior year of college, a schedule filled with school and sports would soon be upended, replaced with pain and uncertainty – the life she was planning threatened by a disease that, initially, refused to reveal its true identity.

Instead of closing out her career as an Ohio State student, Erica was consumed by growing pain from an unknown source.

“I started noticing these pains on my bones that felt like bruises that weren’t visible,” Erica says. “So I would call them my invisible bruises.”

Over a matter of weeks, those invisible bruises grew into agonizing pain. The cross country runner accustomed to racing opponents was facing a challenge she couldn't see or overcome.

“I couldn’t run anymore. I would still go to the indoor track and time my teammates and sit there and be their coach, but everybody knew that something was going wrong.”

The impact soon extended from the track to every area of Erica’s life, affecting her ability to walk, attend class or even get out of bed.

“That’s when I really knew that something had to be done – but my doctors were trying and they weren’t figuring it out.”

Countless hours of research have led to dramatic improvements in cancer treatment, but that success can lead to surprise when doctors are unable to quickly identify the disease. And despite Erica’s natural suspicion that cancer was the culprit – her father had died of the disease when she was only seven – the fact that it hadn’t been identified gave her hope that the cause of her pain was something less serious.

“The reason I wasn’t hooked on that was that I had seen so many doctors already, that I figured they certainly would have found it by now.”

While answers were absent, the pain was ever-present, resulting in multiple trips to emergency rooms and prescriptions that did little to ease the symptoms. Repeated rheumatology exams also failed to identify the cause, though by that time, Erica had given her tormentor a name.

“I told everyone that I had the “itis.”

Finally, after four months without clarity, Erica was referred to an oncologist at The Ohio State University Comprehensive Cancer Center – James Cancer Hospital and Solove Research Institute (OSUCCC – James), a connection that would finally shed light on the cause of Erica’s symptoms – but not before she was forced to endure her worst pain crisis yet, just one day before her appointment.

“I remember laying in bed with my mom, just sobbing, and actually asking to die because I couldn’t deal with it any more,” she says. “That was the most desperate night of my life.”

“I was terrified, but I was so relieved”

The next morning at the OSUCCC – James, Erica’s new oncologist ordered blood work, which showed an abnormality that indicated the presence of cancer, releasing a flood of competing emotions.

“I was terrified, but I was so relieved,” Erica says of the news. “I had some direction for the first time.”

“I thought I was going to die when I heard that.”

Immediately assuming the role of support she would never relinquish (“She actually refused to leave the bedside.”) Erica’s mom delivered a simple response: “We’re going to do this.” Still in the room, the oncologist backed up that message, instilling optimism in Erica that would persist throughout even the darkest days of her journey to recovery.

“When she said, ‘I’m confident that you’re going to beat this,’ I knew I was going to make it out o.k.”

“Who is this person?”

Erica’s new team at the OSUCCC – James wasted no time getting to work, starting chemotherapy the day after her diagnosis. The hospital quickly became a second home, filled with visits from family and friends, and constant support and reinforcement from her doctors and nurses.

“Everyone is trained so well – and so compassionate – that I really believed that I was going to get the best care there.”

Erica would come to rely heavily on her support system in the months ahead as she faced the types of challenges that so often accompany cancer treatment.

Among the hurdles placed in Erica’s path were a blood clot that caused seizures and forced her temporary admission to the ICU, and as her first chemotherapy round progressed, a battle with depression that turned daily activities into exercises in mental resilience.

“The shower is when I always had emotional moments,” she says. “I’m in a shower chair, I can’t control the temp the way I want to, I’m getting hit in the face with water, my hair is falling out – I cried and my mom cried with me.”

For the 22-year-old athlete who just months before was preparing for final exams and medical school interviews, the physical manifestation of her treatment could be jarring.

“I had these tiny soft brown hairs, and these big wide eyes like a deer in the headlights and I just thought, ‘Who is this person?”

“From then on, I just became stronger”

With every obstacle, though, came the opportunity to overcome, finally culminating in Erica’s discharge from the hospital – a milestone that was quickly followed by another: her graduation from Ohio State.

Erica was given the honor of leading the line of her college’s graduates – her illness altering her appearance, but unable to prevent her achievement.

“I did it. I graduated. Bald, big steroid cheeks and everything – but I did it.”

From that moment, Erica took on the role of cancer survivor, working every day to regain her strength and continue the construction of her future.

Though slowed by a bone marrow transplant (“For the first time in my life, I watched a lot of Netflix.”) she soon started walking with regularity. By the next month, she was running again.

“From then on, I just became stronger.”

The support of friends and family served as the foundation of Erica’s recovery efforts – a fact that she stresses to young cancer patients who may not recognize the value of accepting help.

“There has to be a process of understanding that you’re not going to be quite independent anymore,” she says. “It’s OK to ask for help. You’ve just been diagnosed with cancer.”

For Erica, that support system was strong, comprising friends, family member, doctors and nurses (“I wrote a lot of thank-you notes”). In addition to her mom, that group was headed up by her now-husband, Andrew, who continues to provide needed support as the couple navigates a post-cancer “new normal” that includes the aftermath of early menopause – and its impact on fertility – brought on by her treatment.

“[Andrew has been] amazingly understanding about everything. He was so caring throughout the whole process,” Erica says. “I don’t feel any guilt, any shame for what has happened, but it’s still something that impacts us together. And we face that together.”

“It’s amazing what people do to support cancer research”

Never one to shy away from a busy schedule, the student-athlete turned cancer survivor spends much of her time advising young adult cancer patients and working with donors and supporters to encourage vital research funding.

“It’s a community that I’ve entered with a whole bunch of compassionate and generous people. It’s amazing what people do to support cancer research.”

Erica felt the benefit of that support first-hand at The James, where world-class research and care come together under one roof, providing patients with much-needed peace of mind.

“Knowing how much research is done here – it allowed me to trust them completely,” Erica says of The James. “I was only able to do that because I knew that they were going to be the ones to take care of me the best. That’s really why I felt safe.”

“Cancer doesn’t define me, but it is part of my identity”

Now a medical student at Ohio State, Erica is looking forward to a bright future, while accepting that her past will always be a part of her present.

“Cancer doesn’t define me, but it is part of my identity.”

As for parting advice for other young adults forced to confront cancer, Erica points to lessons learned from the disease that caused her so much pain, but also provided her with a new perspective.

“It’s going to be terrible, but it’s going to be a learning experience. Part of you needs to be able to say, ‘Yes this sucks,’ and let it out and cry, but also look at the blessing of the time you’re going to be able to spend with your friends and family,” she says. “It’s the little things. Getting out into the world and seeing how beautiful it is, especially knowing that you were at risk of not being in this world if not for all the amazing treatments we now have.”

Help Erica support adolescent and young adult cancer research at The James at the 2019 Columbus Mac & Cheese Fest. Get your tickets today.