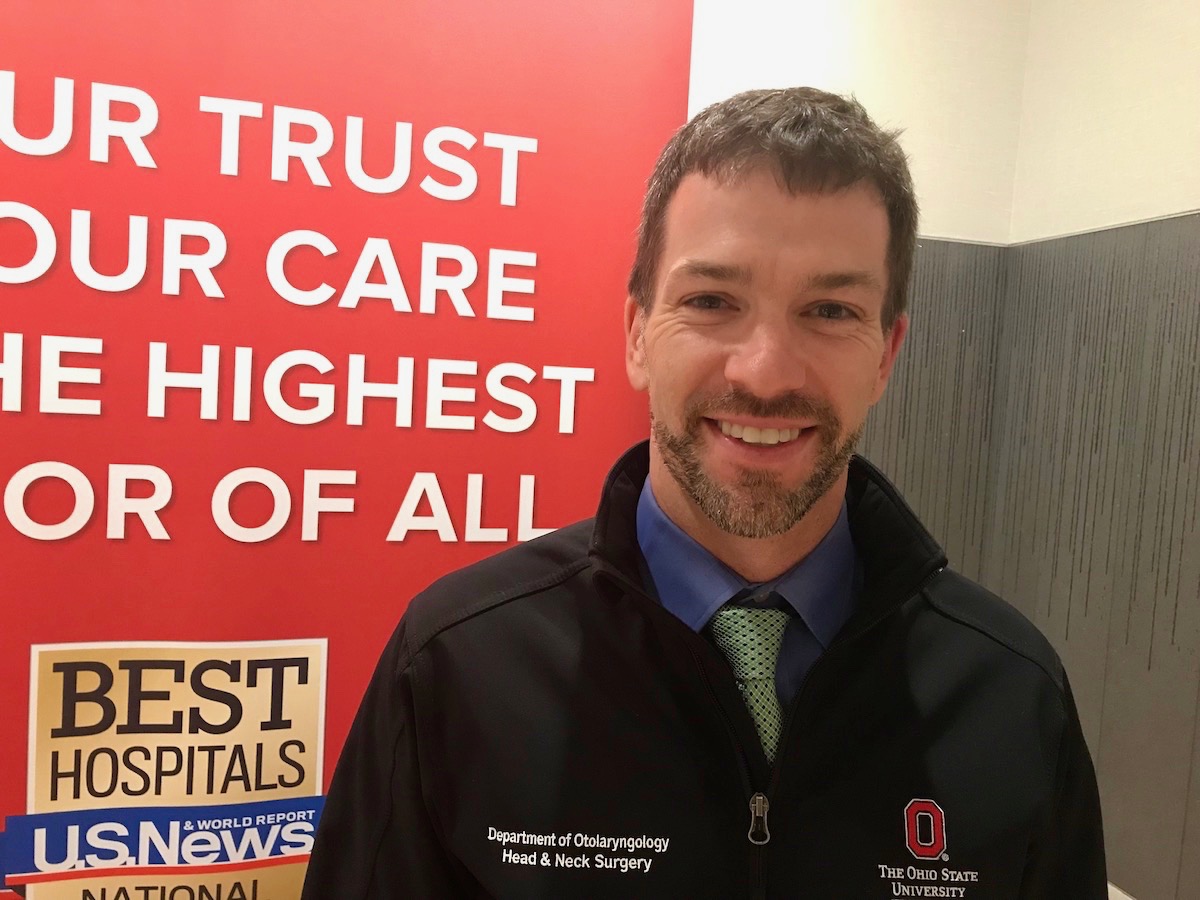 The outcome for patients with head and neck cancer has improved steadily over the years, but Matthew Old, MD, is far from satisfied. He’s not a status quo kind of doctor.

“It’s that internal desire and drive to do something more for our patients that’s behind what I do,” says Old, the OSUCCC – James physician of the month for April.

Old does state-of-the-art surgery and cutting-edge research that focuses on the promising field of viral immunotherapy. Old is involved as a collaborator and primary investigator in several clinical trials that have begun to show the benefits of using genetically-altered viruses to help the immune system better identify, attack and destroy cancer cells.

“It’s such a sensitive area,” Old says of the head and neck. “So, yes, we’re getting better outcomes and saving more and more lives, but the side effects are quite toxic and impact the patient’s form, function and ability to swallow, breathe and speak.”

Old wants to reduce these side effects and improve the quality of life for his patients. He believes oncolytic viral therapy is a path toward this goal.

During these treatments, oncolytic—or genetically-altered—viruses such as the herpes simplex, are injected directly into the patients’ cancerous tumors, where they begin to multiply. The viruses then attack the cancerous cells.

“Because the immune system is ramped up from a viral infection, it’s now better able to detect and turn against the cancer cells infected by the virus,” Old says.

According to the National Cancer Institute: “When a virus infects a tumor cell, the virus makes copies of itself until the cell bursts. The dying cancer cell releases materials, such as tumor antigens, that allow the cancer to be recognized, or ‘seen,’ by the immune system.”

The ability of oncolytic viral therapy to utilize the body’s own immune system makes it such a promising option.

“Because it’s the body’s own immune system attacking the cancer, the side effects are dramatically reduced,” Old says. “We’re starting to look at combining viral therapy with other forms of immunotherapy as the next step, and this could improve our outcomes even more.”

Old grew up in New Orleans and Houston and always knew exactly what he wanted to do with his life. “I can’t really identify why, there’s nobody in my immediate family who’s a physician, but I always knew that’s what I wanted to do.”

He attended Stanford University and then medical school at the University of Texas, and initially planned to be a pediatrician.

“One of my minors at Stanford was virology and I was always fascinated with viruses and how they do what they do,” he says, adding that during medical school he also became interested in surgery and was also mentored by an ear, nose and throat surgeon. When you add up all these interests, the result is a head and neck cancer surgeon with an interest in viral oncolytic research.

Old often collaborates with Timothy Cripe, MD, chief of the division of hematology/oncology/bone marrow transplant at Nationwide Children’s Hospital. Cripe is also a professor in The Ohio State University College of Medicine and a member of the OSUCCC.

“The trials were promising and showed that the virus was safe and that we can try bigger doses, and also that injecting the virus through an IV was a step forward,” Old says.

These trials used Imlygic (or T-VEC), a genetically-modified herpes simplex virus from Amgen that was approved by the U.S. Food and Drug Administration in 2015 for the treatment of melanoma.

Old and Cripe are also the co-principal investigators on a new clinical trial that utilizes a genetically-modified vesicular stomatitis virus that is tracked by imaging as it grows and travels throughout the body.

Some of the seed money that has helped lead to the clinical trials involving Old has come from Pelotonia, a fundraising bike ride that has raised more than $157 million for cancer research at the OSUCCC – James. Old and several members of his family—including Molly, the captain of Team Buckeye – Team Head and Neck—have become regular Pelotonia riders, with the doctor riding every mile (1,620) of each event. He plans to do the new, 200-mile route this year, Pelotonia’s 10th anniversary ride.

“My dad comes in from Texas every year to ride, and so do my brothers, William and Andrew,” Old says, adding that, yes, the three Old brothers are a bit competitive when it comes to riding in Pelotonia.

“My brothers have also been able to meet some of my patients along the way, including some who are riding,” Old says. “That’s a really great experience for them to meet my patients and to really see why we’re riding for a common goal—to cure cancer.”

Meet Our Faculty and Staff, Research and Education