Bringing Musical Healing to Patients at The James 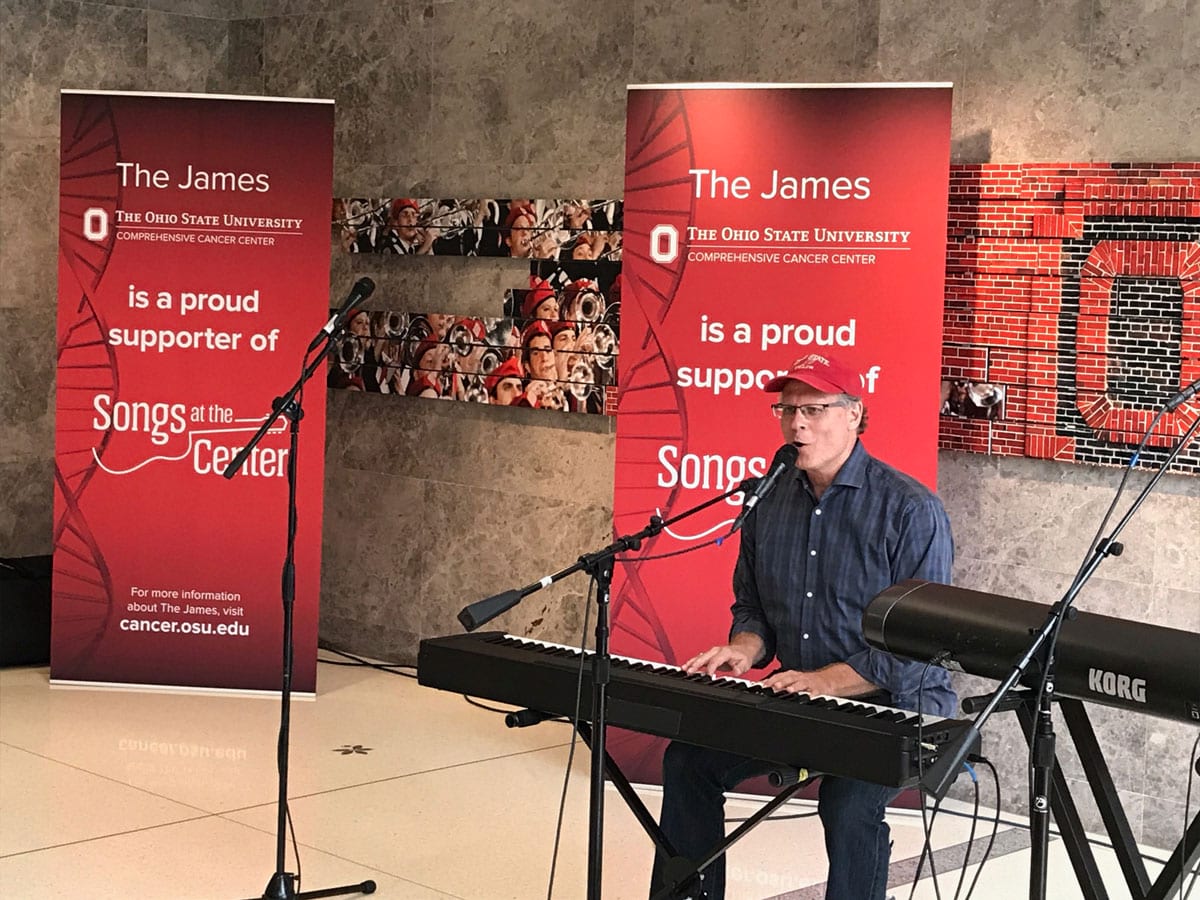 As he sat down at his keyboard set up on the ground floor of the James Cancer Hospital and Solove Research Institute, and began playing and singing Blossoms of Hope, the expression on Eric Gnezda’s face changed.

The friendly smile turned into a look of compassion, love and, yes, hope.

“Blossoms of hope, grow side by side,” Gnezda sang as he launched into the chorus. “Friends help us cope till fears run and hide … energy flows with the love that’s inside those blossoms of hope.”

Gnezda is host of Songs at the Center, a popular American Public Television series that features performances by and interviews with singer-songwriters such as Don Henry, John Oates and Tom Russell. The show airs locally on WOSU, Columbus, at 11 p.m. on Saturday nights. The James is a sponsor.

“We could not be prouder that The James is sponsoring Songs at the Center and we can bring their message to a wide audience,” Gnezda said.

He has been performing for central Ohio and James cancer patients and their families for many years in a variety of settings. Blossoms of Hope was written for his sister during her cancer battle (she’s doing well) and is dedicated to everyone embarking on their own cancer journey.

“I’ve spent my life exploring and practicing music for reasons beyond just entertainment,” Gnezda said. “Music can do so much more, it’s a proven healer and Songs at the Center and The James understand the arts are part of the healing process.”

Gnezda recently brought Songs at the Center to the lobby of The James, inviting four of his favorite singer-songwriters to join him: Kate Klim, T.J. George, Matty Monk and Jasey Schnaars. They all live in central Ohio and have had long, interesting and successful careers writing songs for others and performing and recording their own music.

Their two-hour performance will not be aired on television as an episode of Songs at the Center (there are technical issues with filming in the lobby of a hospital), but it was streamed live into the rooms of the approximately 300 patients at The James. Many other people (patients, friends and family members, and staff), attracted by the sweet sounds, wandered over to listen.

Songs at the Center airs on more than 160 PBS/ABT stations nationwide.

T.J. George has performed all over the country.

“This feels special,” the Columbus resident said before he and Kate Klim performed together, taking turns singing their original songs. “We have the opportunity to touch people who need a bright light … and that bright light comes back to us, it’s a wonderful give and take.”

This was, in a way, a return engagement for Klim.

“I was just here (at the Wexner Medical Center) nine weeks ago tomorrow to give birth to my son,” she said. “So, it’s super appropriate that I’m here and if we can bring any type of healing through our music, that’s great.”

“To hear the singer-songwriter sing their own songs is the strongest thing,” Gnezda said. “It’s amazing how the great writers can take you through a full-length movie in three minutes.”

Gnezda first performed for cancer patients in the early 1990s, before there was a James.

“I was asked to perform at a cancer survivor’s event and I was scared,” he said. “What can I bring? I got up and did what I do and the response was great and that’s when, for me, the idea of music and healing started.”

He has subsequently played at several James events and created the Voices of Hope Choir. “They were all cancer survivors and you can see us perform Blossoms of Hope right here at The James on YouTube.”

As much as Gnezda and his music bring to cancer patients, he said he gets even more from them.

“To listen and absorb the experiences of cancer survivors is to learn at the feet of the masters,” he said. “You learn all about hope and, most importantly, you learn about what really matters. We live in such a fast-paced society and everybody is focused on the externals: jobs, money, how many records did I sell. When you talk to cancer patients, they understand their time might be limited and there’s no time for anything but authenticity.”

Songs at the Center is taped at the Peggy R. McConnell Arts Center of Worthington, and other select venues. For more information on the show, including info on how to attend a taping, click here.

“I invite everyone in The James community to attend, we would love to have you there,” Gnezda said.

Living with Cancer, Giving Back