Carole and David Schuller: A Passion for Living, Giving and Working Toward a Cure 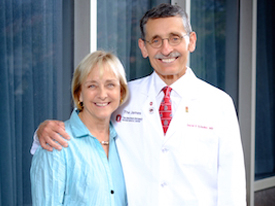 Carole and David Schuller, MD, celebrated their 47th wedding anniversary this year, and it’s quickly apparent why: They laugh together,praise and support one another and share a love for family and friends. Their passion for life is evident — whether taking grandchildren to an Ohio State Buckeye football game, walking their beloved corgis or talking to donors about supporting The Ohio State University Comprehensive Cancer Center – Arthur G. James Cancer Hospital and Richard J. Solove Research Institute (OSUCCC – James). And both are firmly committed to the new James Cancer Hospital and Solove Research Institute, even when it has meant long hours, other sacrifices of time and their own generous giving.

After meeting in an ecology class they took together during their undergraduate years at Rutgers University, the Schullers have spent nearly five decades together making a positive impact on people’s lives—most of those years at Ohio State.

“Our appreciation of the University has grown over the years because you have a chance to personally observe the impact it has on people’s lives,” says Dr. Schuller. “The research and education that goes on at this University enhances the lives of millions of people throughout the state of Ohio, nation and world. It’s just a spectacular place.”

As vice president of medical center expansion and outreach, Dr. Schuller’s vision for the new James Cancer Hospital and Solove Research Institute, opening in December 2014, is nothing less than spectacular, as well. Building on the strengths the OSUCCC – James has cultivated since the opening of the original James in 1990, the new hospital will further and more closely integrate research and education into patient care — enriching all three areas of the hospital’s mission.

Says Carole, “It’s amazing what David has thought of. No matter where we are, he is constantly thinking about this project and the people whose lives it touches. He wants the best for everyone, and when he finds something he likes, he finds a way to make it happen.”

Dr. Schuller concurs that planning for the new James has occupied much of his time.

“Not a day has gone by that I haven’t thought about the project, met about it or argued about it for 12 years.” And he has loved every minute of his work,sharing his passion for the new James and persuading others to support it. “I help people understand what the problems are, then share Ohio State’s vision for impacting the problem and how they can help. That message resonates with people, and they want to make a difference.”

Through everything, Carole has been Dr. Schuller’s partner in professional success.

“When it comes to donor relations,” says Dr. Schuller, “we truly are a team. Carole is a very gregarious person — she loves interacting with people. When we visit people in Florida and Arizona in the winter months, if Carole isn’t with me, invariably the first question I’m asked is, ‘Where’s Carole?’ And immediately my meeting is cut short by 50 percent,” he laughs.

Carole has given tours of the original OSUCCC – James and decorated during holidays; participated in the Up on the Roof event committee each year and worked on the Stefanie’s Champions awards luncheon and the Herbert J. Block Memorial Tournament. Wherever there is a need, Carole is there. “She gets involved and does it,” says Dr. Schuller. “She usually doesn’t hold any official position; she just pitches in and does her thing.”

In addition to the immense time and passion the Schullers have invested in the OSUCCC –James, they have also been very generous personally. “We have always been taught that you support the things you love,” says Carole.

“How do you expect other people to support something if you don’t support it yourselves? We want to show people how much we believe in this.”

The Schullers have generously supported the building of the new James Cancer Hospital and Solove Research Institute. To honor their giving, a space on the 21st floor of the new building has been named the Carole, Dave, Rebecca, and Mike Schuller Family Visitor Lounge. They have also generously supported the Otolaryngology Head and Neck Oncology Fund, a discretionary fund enhancing the work of the department where Dr. Schuller was once the chairperson.

If the Schullers’ hopes for the new James are realized, Ohio State will tackle critical work in coming years to convert cancer into a controllable disease. “I remain confident that this new building is going to accelerate our rate of progress,” says Dr. Schuller. “We will be able to impact incidence and severity of cancer in mass populations rather than just on an individual basis.” And when this has been accomplished, says Dr. Schuller with his signature humor, “We plan to convert the cancer hospital into the world’s largest cosmetic surgery center.”

Giving Back, New Home of The James, Meet Our Faculty and Staff