Doctor Has Big Plans for "Basic" Cancer Research at The James 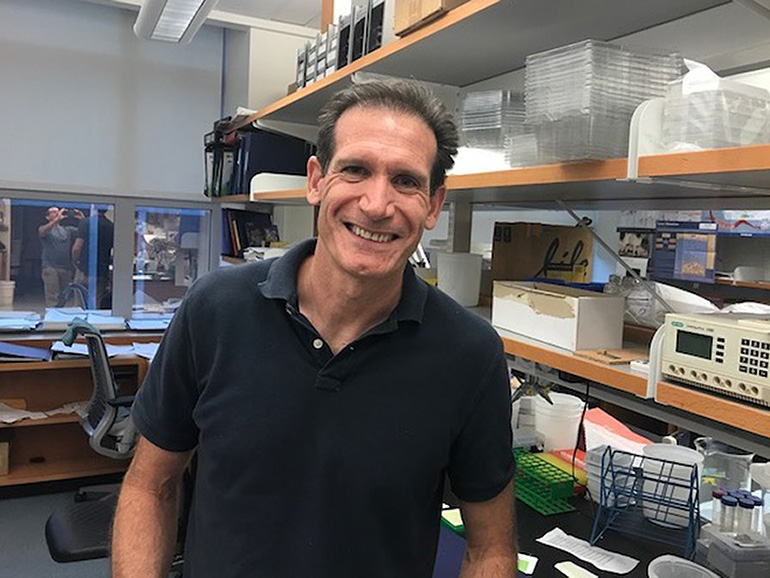 Denis Guttridge, PhD, believes very much in the power of collaboration.

“You get better and do better science by talking to and working with really smart people,” said Dr. Guttridge, who was recently named associate director for basic research of The Ohio State University Comprehensive Cancer Center – James Cancer Hospital and Solove Research Institute (OSUCCC – James).

The strong culture of collaboration was one of the reasons Dr. Guttridge came to Ohio State in 2001. And now, in his new position, he is determined to encourage and foster even more of the research relationships and laboratory partnerships that are so common at the OSUCCC – James. “There is such an enormous amount of awesome research going on here,” he said. “I’d like to take it to the next level by creating even more collaboration and finding new ways for our people to share their knowledge and tackle problems with their shared expertise.”

“It’s the study of the basic properties of cancer cells, understanding the mechanisms of cancer-cell growth and how these cells function, develop and progress,” said Dr. Guttridge, who is now responsible for coordinating basic research across the OSUCCC – James.

Understanding the basic science of the formation and growth of cancer cells is the first step in beating cancer. The second step is translating this knowledge into strategies to target and kill cancer cells, which in turn leads to new drugs and treatments, and then the clinical trials that result in the big breakthroughs that can save lives.

Think of basic research as the foundation upon which all the advances in fighting cancer in the last few decades have been built.

The foundation of Dr. Guttridge’s strategy for creating even more collaborations among OSUCCC – James investigators is to familiarize himself with all the research being performed by the 300-plus cancer researchers - and the teams in their labs – in 12 of the university’s 15 colleges.

And yes, this is a lot of cancer research to absorb.

“I told myself I’d give myself a year to absorb it all,” said Dr. Guttridge, who was named associate director for basic research on February 1, 2017.

To make this happen, Dr. Guttridge is meeting regularly with the five co-leaders of the OSUCCC – James’ five cancer research programs: Cancer Control (or Population Sciences), Leukemia Research, Molecular Biology and Cancer Genetics, Molecular Carcinogenesis and Chemoprevention, and Translational Therapeutics. Each of the 300-plus cancer researchers – and the members of their labs – at The Ohio State University are in one of these five programs.

Dr. Guttridge was previously the co-director of Translational Therapeutics.

“I’m learning the strengths of each of our five programs, and where we need to bring in even more quality recruits so we can continue to grow and increase collaborations,” he said.

In his new position, Dr. Guttridge will be more involved in these recruiting efforts. One of the most important qualities he looks for in investigators is the ability to work together in teams, a philosophy that is not as common at other cancer centers as it is at the OSUCCC – James.

The development of the OSUCCC – James into one of the world’s top research and treatment centers has made recruiting the best talent a lot easier. “We have become a destination, a place people want to come because they know how good we’ve become and they’ve recognized the strong community support we have in central Ohio,” he said, adding Pelotonia is a perfect example of this type of community support.

Dr. Guttridge’s own research focuses on NF-kB, a protein found in all cells. He believes it contributes to the development of pancreatic cancer, which usually occurs in patients 60 and older and is currently the third deadliest cancer. Dr. Guttridge and his team are learning the new ways NF-kB is important for initiating pancreatic cancer, and how this molecule can be targeted for potential therapy.

Science fascinated Dr. Guttridge from an early age, and was something he knew he wanted to pursue as a career.

“You become a scientist because it really speaks to you, it’s your passion,” he said, adding that initially, he wasn’t sure which of the many areas of science that fascinated him was the one in which he would make his mark. After receiving his undergraduate degree in cell biology from the University of California, San Diego, he earned a master’s degree in biochemistry (“A very broad area of research,” he said) from California State University, Long Beach in 1988.

While he was at Long Beach, his mother, Anne-Marie Guttridge, had a re-occurrence of breast cancer and passed away. “After that, I told myself I was going to work in cancer research,” said Dr. Guttridge, who earned his PhD in Molecular Genetics at the University of California, Irvine and did his post-graduate studies in a cancer lab studying NF-kB at the University of North Carolina, Chapel Hill.

“When my mother was first diagnosed with breast cancer, the treatment options were poor,” Dr. Guttridge said. “I know that if she was diagnosed today, her prognosis would be so much better. I know there are many cancers we haven’t figured out how to manage, but there are so many today that we are making a difference in and I really do believe we are starting to win the war on cancer.”

Thinking about his mother, he said, “keeps me motivated to work even harder.”

Meet Our Faculty and Staff, Research and Education