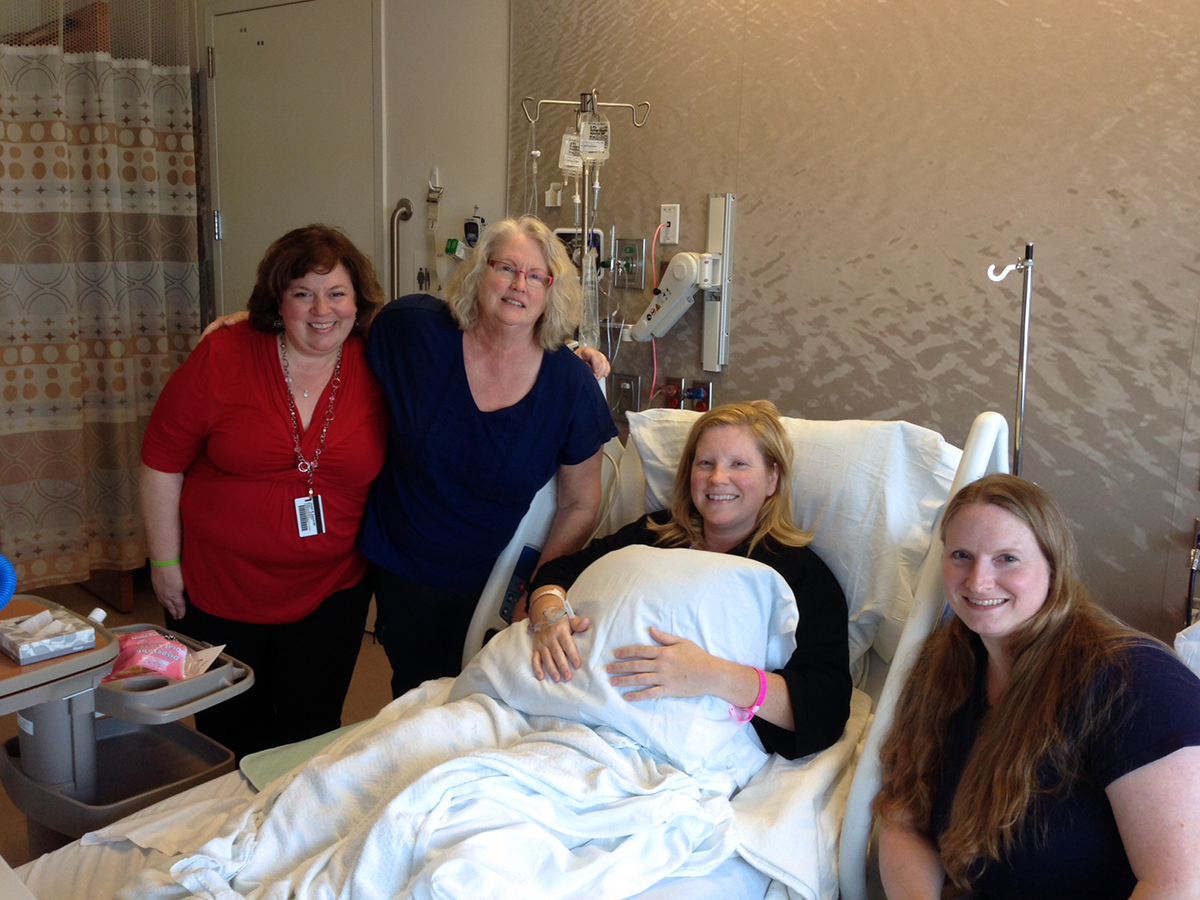 When you’re a mom and your daughters have the inherited the BRCA gene mutation that greatly increases a woman’s risk of developing breast cancer, it can be tough news to swallow.

“I feel responsible; I’m the one who gave them the BRCA mutation,” said Becky Hines, 65, as she sits in a room of The Ohio State University Comprehensive Cancer Center – James Cancer Hospital and Solove Research Institute with her twin, non-identical daughters, Erin Arthur and Kelly Sullivan.

Arthur has been out of surgery — a double mastectomy and reconstructive surgery — less than 48 hours.

“I feel pretty good, a little sore and tingly, but good,” Arthur said, adding she’s glad her surgery is over and relieved she’s eliminated the risk of one day developing breast cancer like her mother did, 10 years ago.

In the room with the three women is Doreen Agnese, MD, a surgical oncologist at the OSUCCC – James.

Dr. Agnese performed a lumpectomy on Hines 10 years ago, and urged her to undergo genetic testing to determine if she carried the BRCA mutation. Dr. Agnese performed the double mastectomy on Arthur, while Maristella Evangelista, MD, of the OSUCCC – James, did the reconstructive surgery.

At this point, Dr. Agnese is one of the family, according to Hines.

Dr. Agnese has come by to see Arthur and “check under the hood,” to make sure her incisions, or “flaps,” are healing properly and her four drains are draining properly. She also reassures Hines it’s not her fault that her daughters have the BRCA mutation. It’s the luck — or bad luck — of the genetic pool, something well beyond her control.

“And, because of you, they know they have the BRCA mutation and can be proactive,” Dr. Agnese tells Hines, who thanks her.

The story of Hines and her daughters is one many mothers and daughters face. It’s a tale of love and courage, difficult decisions and about how genetic testing saves lives.

“Everyone has the BRCA genes,” Dr. Agnese explained, adding there are two types: BRCA1 and BRCA2. “They work to prevent cancer. If you have a mutation in one of the genes, that increases your risk.”

The OSUCCC – James High-Risk Breast Cancer Program was created to meet the needs of women with an increased risk of developing breast cancer. It provides risk assessment, education, emotional support and ongoing surveillance.

Arthur and Sullivan are 40 and have the BRCA1 mutation. This also means their odds of developing ovarian cancer jumped from 1.3 percent to 39 percent, according to the NCI.

“My family doesn’t even have a history of breast cancer,” Hines said. “I’m so thankful Dr. Agnese encouraged me to get the genetic testing. It has saved my daughters’ lives.”

Arthur and Sullivan had their genetic tests done together, on Jan. 15, 2009 at the OSUCCC – James. They went in together, on Feb. 4, 2009, to get the results from a genetic counselor. With Hines, of course.

“We made Mom promise she couldn’t cry, no matter what the results were,” Sullivan said. “But she cried. A lot. It was an emotional moment, but we gained the knowledge we need to keep ourselves healthier for longer.”

Once a woman knows she has the BRCA mutation, there are three options, Dr. Agnese said. The first is more frequent surveillance, starting at an earlier age. Arthur and Sullivan have been going to the Stefanie Spielman Comprehensive Breast Center twice a year since 2009, alternating between a mammogram and MRI. After each test, they meet with Dr. Agnese.

“The two screenings, together, are more likely to find a cancer when it is smaller and less likely to have spread to the lymph nodes,” Dr. Agnese said.

The second option is preventative chemotherapy, such as Tomaxafin. “There’s not a lot of data on this,” Dr. Agnese said, adding Tomaxafin is not effective in preventing triple negative-breast breast cancer, which women with the BRCA1 mutation get at a higher rate.

The third option, which Dr. Agnese calls “the most aggressive,” is the bilateral mastectomy that Arthur opted to have.

“For me, it was peace of mind, not just for me but for my children,” Arthur said. She and her husband, John, have two children: Keegan, 8, and Harrison, 6.

“I always want to be there for them and I’m at an age right now where I can recover quickly and be over that hurdle. I’d rather deal with it now than later, when I’d have to have surgery and radiation and chemo on top of the surgery. That really scares me, and I never want my children to see me go through that.”

Sullivan chose the increased-surveillance option. She and her husband do not have children.

“That’s a bigger surgery than I want to go through at this point,” Sullivan said of a double mastectomy and reconstructive surgery. “Erin wants to do it as a preventative because she has kids to think about, but for me it’s too big a change and I don’t want to do it unless I need to do it.”

There is no right or wrong decision.

“You have to choose what’s most comfortable for you,” Dr. Agnese said. “And, you can do surveillance for a while and opt for surgery later. I think the addition of the MRI and all the improvements in treating breast cancer have made some women more comfortable with surveillance.”

An oophorectomy (the surgical removal of the ovaries) is something Agnese recommends more strongly for women with the BRCA mutation once they close in on 40, and have reached an age where they’ve decided not to have any more children.

Arthur and Sullivan have each had an oophorectomy in the past few years, to eliminate the possibility of ovarian cancer.

“(Ovarian cancer is) so often diagnosed in the later stages and we don’t have therapies that are as good for ovarian cancer as we do for breast cancer, and it is often fatal,” Dr. Agnese said.

While Dr. Agnese performed the double mastectomy, Dr. Evangelista and her team made a long, football shaped incision in Hines’ abdomen and removed tissue underneath the skin that they would later use to reconstruct her breasts.

“They can also take it from the back or the butt, if necessary, but the abdomen is better,” Dr. Agnese said.

“My stomach is a little gurglely,” Hines said, adding it hurts when she laughs. And when these three women — and their doctor — get together, even in a hospital room, hours after major surgery, there’s going to be a lot of laughter.

“We’ll go easy on you,” Dr. Agnese said, and everyone laughed again.

"Who's At Risk for High-Risk Breast Cancer?"

"4 Things to Know About BRCA Cancer Risk and Genetic Testing"

BRCA1 and BRCA2 Information from the National Cancer Institute