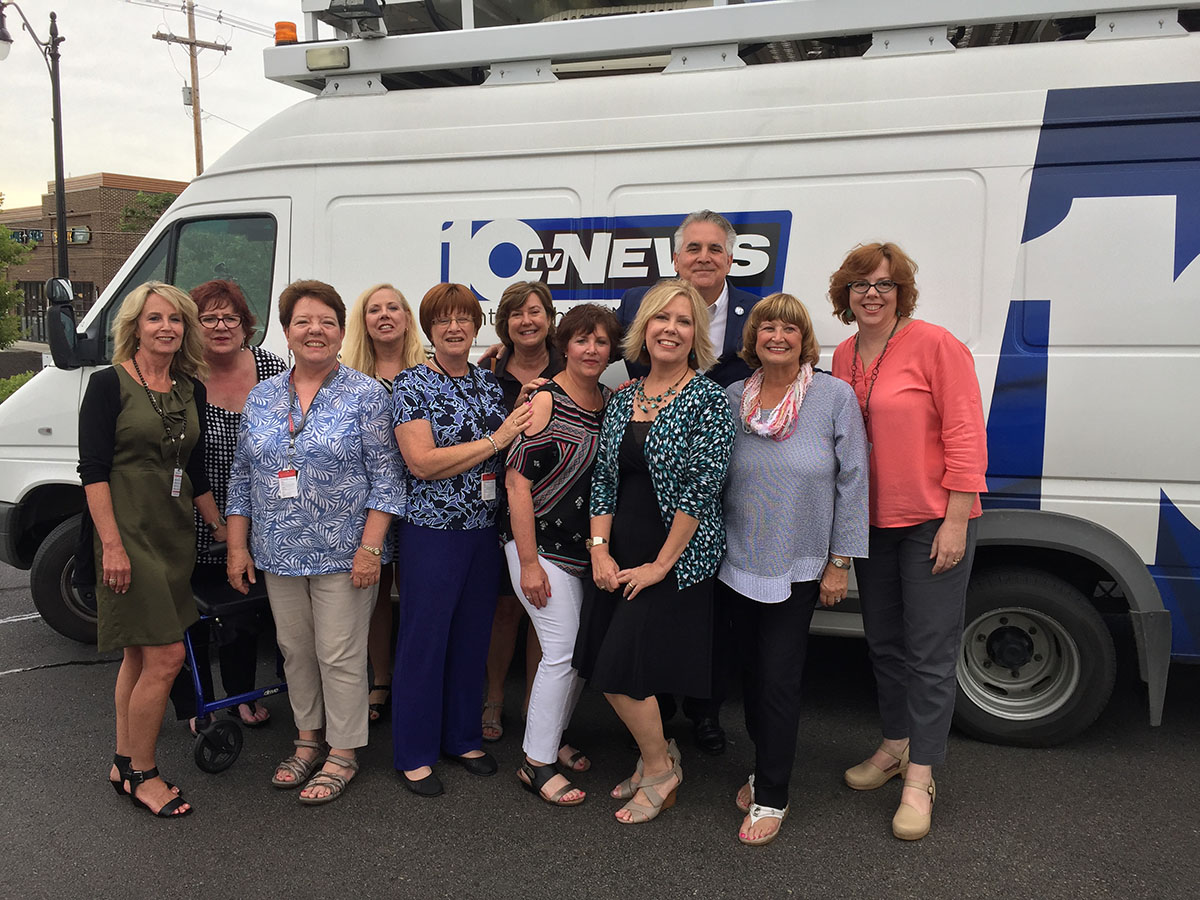 Kathi Robbins had heard of WBNS 10TV sportscaster Dom Tiberi. She also had heard of Schmidt’s Sausage Haus and Restaurant in German Village.

But she had never heard of Dom’s Summer Sizzler, a program that awards people in the central Ohio workplace with a Schmidt’s-catered office party for doing great things.

That’s why Robbins, manager of Hope’s Boutique at the Stefanie Spielman Comprehensive Breast Center near Ohio State’s main campus, was so surprised to learn that she had won the award after being nominated by co-worker Cassy Burke.

“I was completely floored,” Robbins said following a July 11 after-hours party held outside the Spielman Center—an event at which she appeared in four live TV segments with Tiberi while sausages were being grilled and served to an admiring crowd of her colleagues and family members. “Awards like this are not why I do what I do, but to have the respect of my team is very humbling.”

What she and her team do is improve the lives of all who patronize Hope’s Boutique, a specialty shop for cancer patients and their families that is widely regarded as much more than a store.

“We have a saying here: Doctors will save your life, and Hope’s will help you live your life,” says Robbins, who has managed the boutique for over two years. “We want to help patients function as normally as possible in the real world after a cancer diagnosis. And we focus not just on breast cancer, but all forms of cancer.”
For Robbins, an Akron native with a professional background in merchandising and buying, coming to work every day is never a chore.

“It’s fulfilling to be part of an incredible team of selfless women who are so devoted to helping cancer survivors realize that life goes on, and that we want them to feel like they did before their diagnosis,” Robbins says, noting that her staff includes 10 employees and eight volunteers. “It’s easy to come to work here; the days kind of fly by.”

Cassy Burke, a prosthesis and wig fitter, says she nominated Robbins for the Summer Sizzler award because of her “awesome leadership skills.”

“Our team has grown personally and professionally since she started here,” Burke says. “We love her for her compassion, patience, retail prowess and diligence in treating patients and employees with the utmost dignity—all with a great sense of humor. She helps us find fun and fulfillment every day.”

Burke says the daily goal of Hope’s staff and volunteers is to make patients feel good about themselves during a difficult time. “It’s a feel-good job, and Kathi makes it even better by keeping it stress-free.”

Robbins points out that, despite overcast skies and scattered sprinkles, the rain held off until after the office party, “as if the celebration were meant to happen.”

Although she was nervous about being on TV, she credits Tiberi with making her feel comfortable. “It was almost like talking to a family member,” she says. “And Schmidt’s was kind enough to pack up the leftovers for us so we could enjoy the food even afterward.

“It was a great evening that I will always remember. It’s wonderful to be recognized, but it’s really our team, not just one person, that makes Hope’s tick and be so special. We’re blessed to have each other.”