Four years ago, Ohio State alum, Gary Internicola decided he wanted to ride in Pelotonia and pitched the idea to his partner, Susan Davenport, who is a longtime cancer fighter. When registration opened for the 2016 ride, they decided this was the year and registered to ride 50-miles right away.

What Susan didn't know at the time is that the bulk of clinical research behind what she calls her miracle drug was not only done at The Ohio State University Comprehensive Cancer Center Arthur G. James Cancer Hospital and Richard J. Solove Research Institute (OSUCCC – James), but also received initial funding from the bike ride she had just registered to participate in. 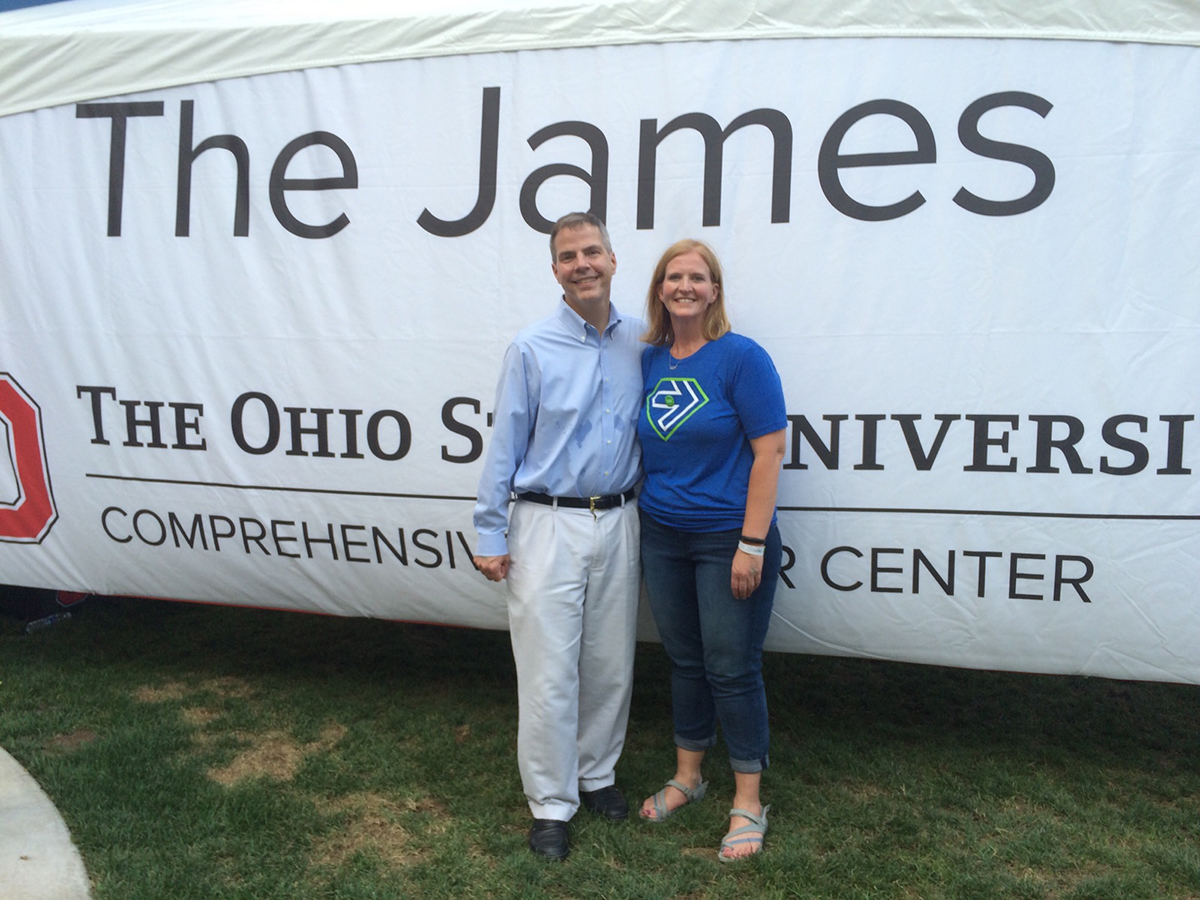 A proud Kansas Jayhawk who now resides in Northern Virginia, Susan has been fighting cancer for 16 years. In December of 1999 -- three weeks before her 30th birthday -- Susan was diagnosed with stage 4B lymphoma and told that she likely had less than a year to live.

"During the process of trying to stay alive, I was told by my medical team that if I survived, it wouldn’t be if, but instead when I would be diagnosed with a secondary cancer or cancers," recalls Susan.

The second cancer diagnosis came in 2003 and the third - leukemia - almost seven years later. She knew firsthand the fear and uncertainty that comes with a diagnosis of cancer and the pain and damage the body endures in the pursuit of survival.

Slightly more than a year ago, after essentially 15 years of cancer treatment or dealing with its long-term effects, as she put it: "My body and spirit were tired. I wanted to stop treatment and try to have a life. I just couldn’t take any more."

Her hometown oncologist had another idea. He told Susan about a drug called ibrutinib, the first in a new class of drugs called Brutons tyrosine kinase inhibitors. The best part: it was a pill taken once a day and 92 percent of the patients treated were in remission with limited side effects. She agreed to try the therapy and it literally changed her life.

Since beginning ibrutinib, her leukemia has stabilized and she has been able to turn her focus to trying to strengthen the rest of her body that has been so battered by more than a decade of surgeries, chemotherapy and radiation.

"I’ve survived cancer to this point," she said, "but no one prepared me and perhaps they didn’t even know at the time the long term implications that treatment would have on my heart, lungs, kidneys, liver, skeletal system, teeth and memory. That’s one of the things that makes ibrutinib and drugs like it so exciting and important. The disease can be targeted without the collateral damage that so many of us have been forced to endure. That’s a huge victory in the fight against cancer, both physically and mentally!"

It wasn’t until an email exchange with Stephani Smolucha, director of fundraising for Pelotonia, about her health and current treatment protocol that Susan learned about the connection between Pelotonia, the OSUCCC – James and ibrutinib.

"After I read Stephanie’s email, I actually cried. I owe Pelotonia and the OSUCCC – James my life, so when Doug Ulman (president of Pelotonia) asked if I would be willing to share my story at the opening ceremony, I jumped at the opportunity to be able to look people in the eye and say to the entire Pelotonia and the OSUCCC – James community -- and most especially John Byrd, MD, Amy Johnson, PhD, and their team: 'thank you thank you for saving my life.'"

At the 2016 Pelotonia opening ceremonies she told the crowd of 14,000 riders, donors, volunteers and researchers: "I am here today because of you and I thank you for that from the bottom of my heart. I look forward to being here with you next year, five years and ten years from now when someone else is standing on this stage telling the story of a life saved thanks to what this group of people accomplished this weekend."

Susan rode 50 miles on Ruby, her trusty emerald green bike, alongside her longtime partner, Gary. She set the bar high, too, as a first-time rider raising nearly $26,000 for cancer research at the OSUCCC – James.

"Its pretty easy to sell people on the importance of something when you can point to actual proof that what you are asking them to be a part of is making a real difference. I have the proof I am living proof."

Already looking forward to Pelotonia 2017, she is building her a Peloton for what she hopes to be a 100-mile ride and has set a fundraising goal in excess of $30,000.

"Patients like Susan are what motivate us as scientists every single day to keep pushing forward despite setbacks along the way to make breakthroughs that will improve the outcome for people fighting cancer," said Byrd, D. Warren Brown Chair of Leukemia Research and hematology division director at the OSUCCC – James.

Byrd and colleague Johnson led the ibrutinib research team at the OSUCCC – James. "Being able to help people with the work you do, its addictive and you want to do it again."

Learn more about Pelotonia Funded Research at the OSUCCC – James.

Giving Back, Living with Cancer, Patient Stories, Research and Education