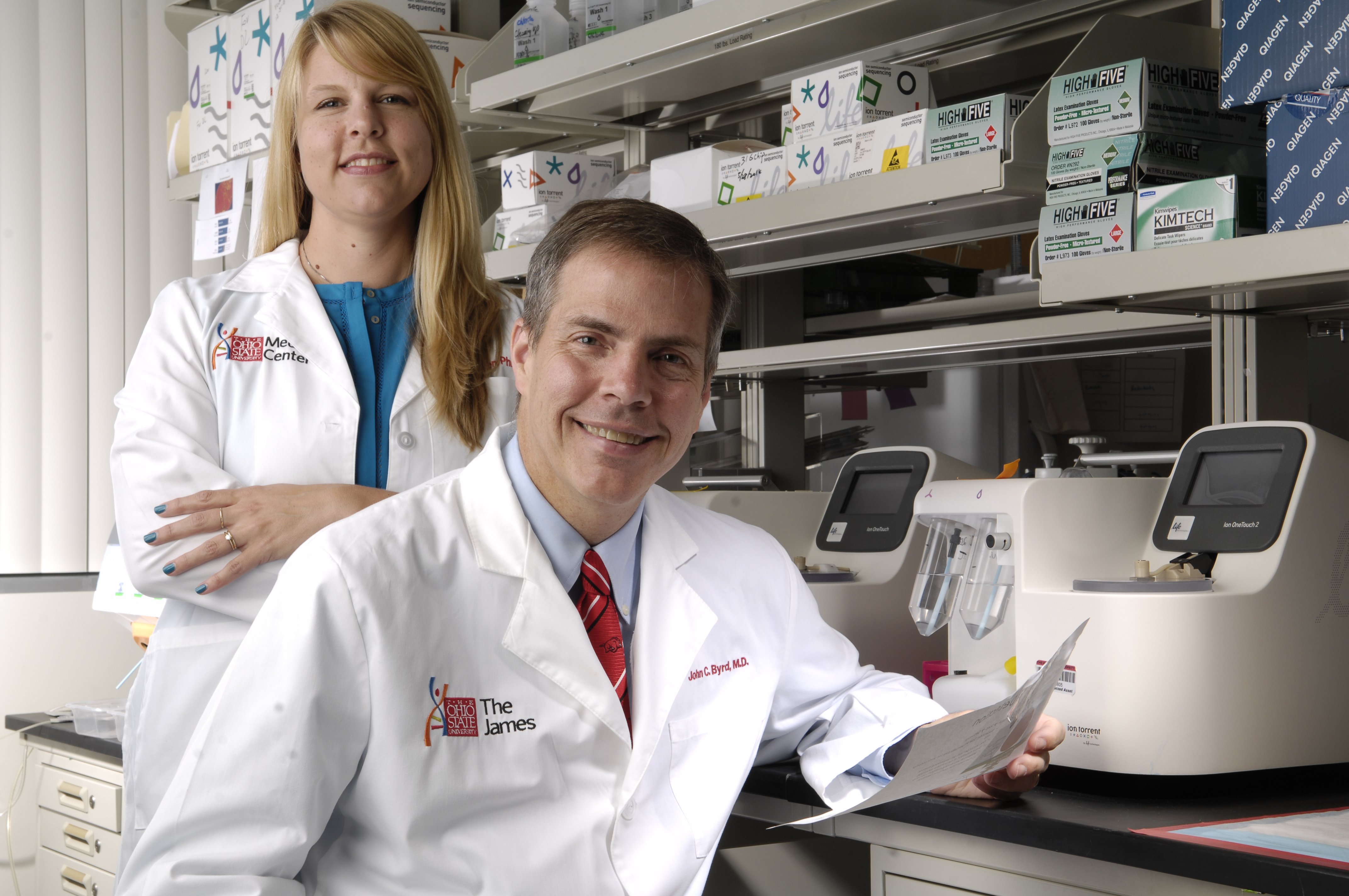 Research breakthroughs that change care at the patient’s bedside don’t happen every day – in fact, sometimes they don’t happen for decades as scientists and clinicians meticulously work together to tease out the mechanisms of action behind a particular disease’s development and progression then formulate treatment options that will result in cancer control, hopefully for the long term.

So when you have a research breakthrough that results in hundreds of patients across the world managing their cancer with a daily pill when they were once told they had an incurable disease, you are driven to do it again. This, says John Byrd, MD, is what personally drives him and that passion is reflected throughout the entire hematologic malignancies research team at The Ohio State University Comprehensive Cancer Center – Arthur G. James Cancer Hospital and Richard J. Solove Research Institute (OSUCCC – James).

In July 2013 when Byrd and colleague Amy Johnson, PhD, published phase Ib/II clinical data showing that ibrutinib was safe and effective for the most common form of adult leukemia, chronic lymphocytic leukemia (CLL) while dramatically increasing progression-free survival and overall survival rates it was the start of a clinical research success story now cited as changing the landscape for CLL.

Ibrutinib was the first agent in a new class drugs called Bruton’s tyrosine kinase inhibitors. The drugs work by permanently binding BTK, which is part of a chain of proteins that relays growth signals from the surface of CLL cells to genes in the cell nucleus enabling cancer cells to survive and grow. By blocking BTK, the drug halts the flow of these growth signals and the CLL cells die.

The team’s research momentum continued when in May 2014, Byrd, colleague Jeffrey Jones, MD, and team published phase 3 clinical data showing ibrutinib significantly outperformed ofatumumab, the other FDA-approved CLL drug, as a second-line therapy for CLL. In February 2015, colleagues Jennifer Woyach, MD, and Kami Maddocks, MD, published data describing the mechanisms of action behind why patients fail ibrutinib therapy, contributing important knowledge that would help the team develop alternative treatments that overcome this resistance for patients who need it.

“As a scientist, this is exhilarating because we have – and continue to make meaningful progress against this awful disease, and we have hundreds of amazing patients who are living full, productive lives as a result,” adds Byrd. “We are transforming CLL from what was thought to be an incurable disease to one that can often be controlled with a daily pill that produces very few side effects.”

Now Byrd is collaborating with OSUCCC – James colleague Rosa Lapalombella, PhD, in an attempt to do the same thing for another difficult to treat blood cancer: acute myeloid leukemia (AML). The disease often strikes people below the age of 40 and effective drug treatments are limited, making long-term cancer control a significant challenge.

The preclinical study will test a new NAMPT inhibitor agent for the treatment of AML. Researchers expect to get insights into the effects of this new class of inhibitors on AML.

“To make breakthrough progress in cancer research and cancer care, we must find and fund the bold new ideas put forth by top scientific minds and allow them to ask the question: Will this work?” says Michael Caligiuri, MD, director of the OSUCCC and CEO of The James Cancer Hospital and Solove Research Institute. “Such ideas potentially bring the highest risk because they are truly unique and, therefore, relatively untested, but they also carry the highest potential reward: progress developing new treatments for patients.”

Not all risky ideas succeed, he says, but the ones that have are groundbreaking and, in some cases, change practice like ibrutinib. (The pilot study offering ibrutinib therapy to CLL patients was funded by Pelotonia.)

“That’s why Pelotonia is so important -- it allows us to invest studies with amazing potential but that are deemed “too risky” by traditional funding sources but that hold tremendous potential to improve cancer patients’ lives if they succeed.”

Meet Our Faculty and Staff, Research and Education, Giving Back, OSUCCC–James