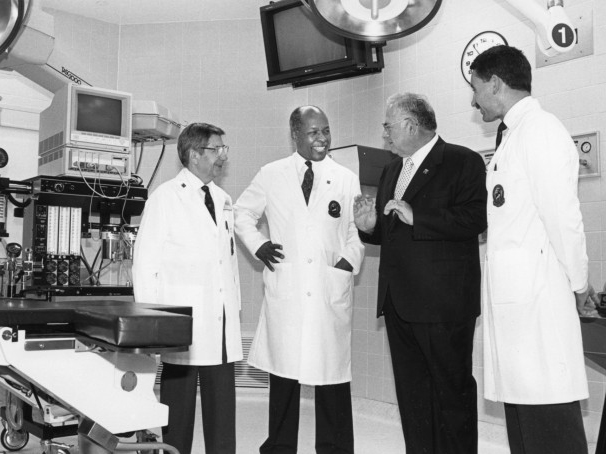 Following his service in World War II and a fellowship at Memorial Sloan-Kettering Cancer Center, Dr. Arthur G. James returns to his alma mater, The Ohio State University, as assistant professor in the Department of Surgery. Inspired by the cancer care he saw at Memorial Sloan-Kettering, and realizing no cancer centers exist between New York and Texas, he dreams of establishing one in Columbus.

The Columbus Cancer Clinic, led by Dr. James, submits a proposal for a cancer hospital to the United Hospital Federation, but it is rejected.

In the year the Nixon Administration declares “war on cancer,” Ohio State has already attracted more than 100 cancer investigators representing seven colleges at the university.

Dr. James resumes his efforts to have a cancer hospital built in Columbus.

Voters reject a bond issue that would have raised funds for a cancer center.

The National Cancer Institute (NCI) designates Ohio State’s cancer program as a Comprehensive Cancer Center—one of only 18 institutions in the country so designated at that time. Dr. James presents his plan for having a cancer hospital in Columbus to a group of influential community leaders and asks for their support.

Aware of strong community support for having a cancer hospital in Columbus, the Ohio General Assembly grants Ohio State $40 million to build it. The university contributes $14 million.

Ground is broken on the construction site at 300 W. 10th Ave.

At the dedication of the new building, a cornerstone is set and the hospital is named for Dr. James.

The James opens for business and admits its first 17 patients.

Dr. James retires from his clinical practice but keeps an everyday presence in an emeritus capacity until 1996.

The James becomes the first cancer center in the nation to gain approval from the NCI to use the drug taxol in patients with advanced ovarian cancer.

By the end of the fiscal year, The James has treated patients from all of Ohio’s 88 counties and from throughout the United States and several foreign countries.

The Statue of Hope on The James’ front lawn is dedicated.

The James Board of Associates (today called The James Foundation Board) is established to help attract new donors and cultivate donor relationships. Chemotherapy services become available at The James at Stoneridge on the northwest side of Columbus.

The James combines its Blood and Marrow Transplantation (BMT) program for adults with the BMT program at Columbus Children’s Hospital (now known as Nationwide Children’s Hospital), creating a comprehensive program to provide care for patients of any age and enabling more pediatric patients to be placed on clinical trials.

Richard J. Solove donates $20 million to the OSUCCC – James for cancer genetics research. In honor of his gift, the institution is renamed the Arthur G. James Cancer Hospital and Richard J. Solove Research Institute. Less than a decade after opening, The James is named by U.S. News and World Report as one of the best cancer facilities in the nation. It has remained on the list every year since.

OSUCCC – James researchers led by Bo Yuan, MD, PhD, and Fred Wright, PhD, produce a genomic map that describes twice as many genes as either of two earlier published maps.

Researchers develop a therapy yielding the best reported survival to date for patients with post-transplant lymphoproliferative disorder, an often-lethal form of lymphoma associated with the Epstein-Barr virus. As a result of this work, more than 90 percent of patients with this usually fatal disease were cured.

Studies led by Ohio State show that one in 35 people with colon cancer carry a hereditary genetic disorder called Lynch syndrome. Based on these findings, researchers recommend screening all newly diagnosed colon cancer patients for Lynch syndrome, which carries an almost 100 percent lifetime risk of cancer.

Ohio State co-leads a study published in the New England Journal of Medicine that indicates that changes in the levels of microRNAs, which help control the kind and amount of proteins made by cells, might predict the risk of relapse in patients with acute myeloid leukemia.

Ground is broken on the New James Cancer Hospital and Solove Research Institute.

The OSUCCC – James receives a near-perfect score on its Support Grant renewal application to the NCI and is ranked as “exceptional,” the highest descriptor. The NCI states that the OSUCCC – James “should serve as a model for other matrix university-based Centers.” Ohio State opens clinical trials on the first two experimental drugs ever created by scientists at this university for testing in adult cancer patients. AR-12 and AR-42, which were highly effective in preclinical models, offer hope to cancer patients with few or no other therapeutic options.

New Home of The James, OSUCCC–James