OSUCCC – James Radiation Oncology: One of the World’s Premier Programs 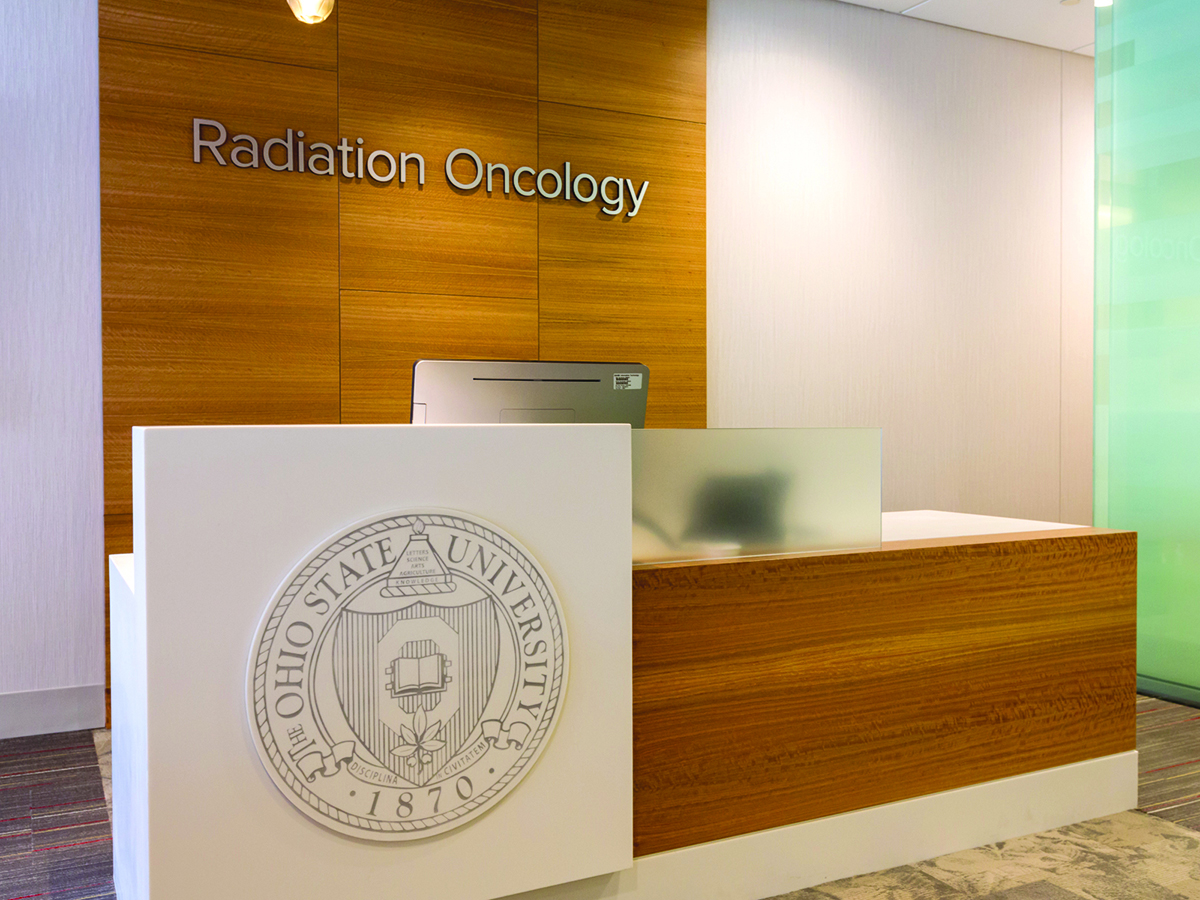 The Department of Radiation Oncology at The Ohio State University Comprehensive Cancer Center – Arthur G. James Cancer Hospital and Richard J. Solove Research Institute (OSUCCC – James) is bustling with opportunity since moving to the new home of The James in late 2014.

The department is one of just a few in the country to be located above ground in a facility rather than being housed on the first floor or basement, possible because of a $100 million grant from the U.S. Department of Health and Human Services’ Health Resources Administration.

News of the grant came just in time, as architects of The James were finalizing plans for the new hospital. The money supported new technologies that allowed the department to be located on the second floor — which is good news for patients and their families, who can enjoy a generous amount of natural light and comfortable lounges. Comfort is so important, and it has been shown to improve patient outcomes.

The move to The James quadrupled the amount of space available for the department; the new hospital has 100,000 square feet dedicated to radiation oncology — an important addition given the influx of new patients the department is treating. Approximately two out of three patients will require radiation. Along with a patient’s medical oncologist and surgeon, the radiation oncologist is a critical part of the cancer care team.

“Radiation oncology has experienced very high growth over the last six years. We are getting patients from all across the state, now more than ever since the opening of the new hospital,” says Julie Sussi, chief administrative officer for the department.

The move to the new hospital and the $100 million grant also nearly doubled the department’s capacity for patient treatment, increasing the number of linear accelerators that deliver radiation to patients from four to seven.

Patient satisfaction surveys — already high before the move — increased an additional point following the transition to the new space.

“Patients who come to this department usually have a good experience,” Sussi said. “They generally are here five days a week for up to seven weeks, so they develop strong relationships with our staff. There is a lot of connection, and it’s a huge part of their care.”

“Through this program, Ohio State will be the first to adopt the most advanced radiation units,” says Arnab Chakravarti, MD, professor and chair of the Department of Radiation Oncology at Ohio State and director of the Brain Tumor Program at the OSUCCC – James. “We’ll be training people from all over the world to treat patients in the most effective, personalized approach possible.”

Just as federal grant dollars have had a huge impact on the department’s ability to procure state-of-the-art technology, philanthropy from the community has had an enormous impact on the patient experience — particularly for pediatric patients who come from Nationwide Children’s Hospital for radiation treatments.

Now the department looks to the community to support research opportunities that could lead to cures or life-extending treatment protocols.

Researchers in the department, for example, are studying the role of the IDH1 gene in patients with grade two glioblastoma brain cancer. Patients with the wild type — or most common — form of the gene, have been shown to have worse outcomes when chemotherapy is used with radiation treatment, while those with the mutant form of IDH1 have better outcomes when both therapies are utilized. Further support can help researchers identify how IDH1 mutations can lead to therapies that target pathways in these very aggressive tumors, making them more sensitive to radiation and leading to better patient outcomes.

Ohio State’s radiation oncology researchers are also collaborating with scientists in Europe to study the effects of salvage radiotherapy on men whose prostate-specific antigen (PSA) levels have increased following radical prostatectomy. By characterizing the role microRNAs play in PSA increases, researchers are uncovering new information that may help to determine which men benefit from prostatectomy in the first place — as well as which therapies may benefit them down the road.

Giving Back, Research and Education