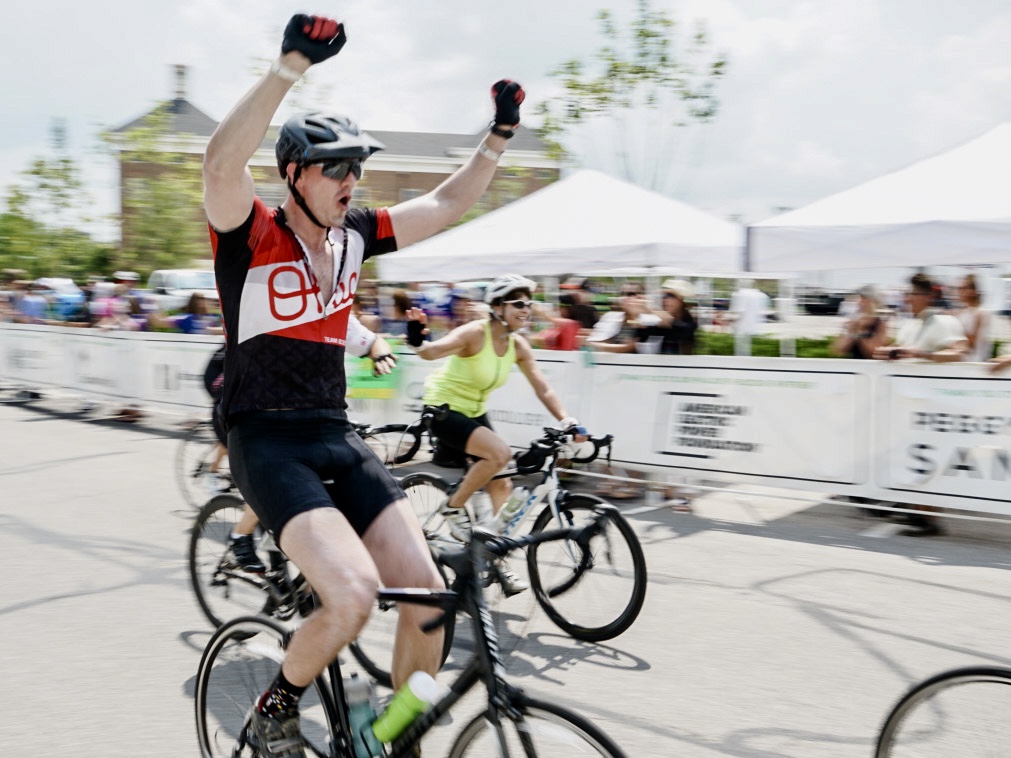 Doug Ulman got a bit emotional as he surveyed the crowd gathered around him at the recent Pelotonia Check Celebration.

“You have changed the landscape of cancer research,” said the three-time cancer survivor and the president/CEO of Pelotonia, the annual bike ride that raises money for cancer research at The Ohio State University Comprehensive Cancer Center – James Cancer Hospital and Solove Research Institute (OSUCCC – James).

“There are people alive today because of you.”

“We see the impact every day, and every dollar we raise has a tremendous impact on saving lives and curing cancer,” says William Farrar, MD, interim director of the James Cancer Hospital and Solove Research Institute.

Farrar has been a Pelotonia rider since the inaugural edition in 2009.

“I’m not a fast rider,” he says. “So, I meet and talk to a lot of people and hear their stories while we ride. It’s so touching to hear all these stories and to know you’re riding and raising money for something that has an impact on all these people’s lives.”

It wasn’t a given back in 2009 that thousands and thousands of riders, virtual riders, volunteers and donors would embrace the new cycling event.

“The word I use is 'audacity,'” Ulman told a group of 10-year Pelotonia participants at the celebration. “To show up 10 years ago and participate in something that didn’t have a track record… and to believe in something brand new and to keep coming back year after year is so amazing. You have transformed the field of cancer research.”

“Everyone is so passionate about Pelotonia because everyone is connected in some way to cancer,” says Chris Scarcello, director of research administration at the OSUCCC – James and a 10-year Pelotonia rider. “We’re blessed to live in a community that is so generous and committed and rallied around Pelotonia.”

“Pelotonia has been able to continue to grow because we were intentional about creating a community of people who cared not just about the ride itself but about each other and curing cancer,” says Kelley Griesmer, the organization’s former chief operating officer.

This sense of community is what drew in Stephen Steinour, president and CEO of Columbus-based bank Huntington, which is one of Pelotonia’s major funding partners. This generous funding support is what enables every dollar raised by Pelotonia riders and virtual riders to go toward cancer research at the OSUCCC – James.

“This community was ready for something like Pelotonia because we’re lucky to have The James here and because one in three women and one in two men will be diagnosed with cancer,” Steinour says.

“Pelotonia created an outpouring of support, and the way they set it up made everyone feel so welcome and part of this amazing community.

“[Pelotonia is] one of the best weekends of the year, every year. It’s a very uplifting experience to meet so many people and hear their stories and to see all the signs that say, ‘I’m cured because of The James,’ or ‘The James saved my wife’s life.’ That’s very emotional, and all these connections and experiences are why Pelotonia keeps building and growing and getting better every year.”

Research and Education, Giving Back