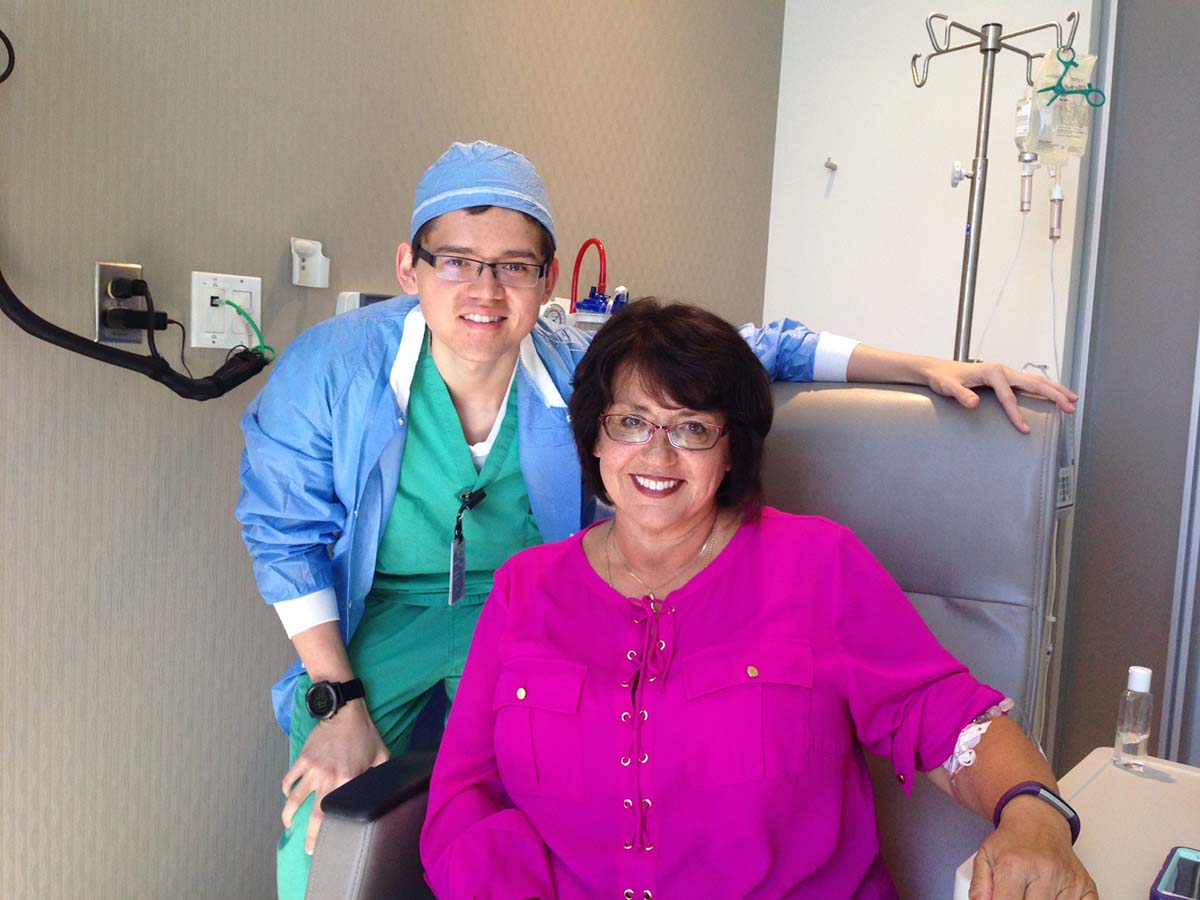 It was Tina Gump’s 61st birthday, and she spent a good portion of the day at The Ohio State University Comprehensive Cancer Center – James Cancer Hospital and Solove Research Institute (OSUCCC – James).

And Tina couldn’t have been happier to share her big day with her second family.

“I brought homemade cupcakes for all my friends here, to celebrate another year of life,” said the Steubenville resident, who is part of a clinical trial run by the OSUCCC – James. “It’s a miracle what they’ve done for me here. I heard ‘cancer’ and thought it was a death sentence, and now I’m back to normal.”

Tina was originally diagnosed with a non-aggressive form of leukemia a few years ago at a hospital near her home.

Her daughter, Megan, who lives near Columbus, convinced her to go to the OSUCCC – James for a second opinion. At the OSUCCC – James, her doctor, Farrukh Awan, MBBS, Associate Professor of Internal Medicine, determined she actually had chronic lymphocytic leukemia (CLL), an aggressive form of leukemia for which there is no cure.

John Byrd, MD, Director of the Division of Hematology in the Department of Internal Medicine at the OSUCCC – James, helped develop a drug called ibrutinib. The drug, approved by the U.S. Food and Drug Administration for the treatment of CLL, “converts CLL to a chronic illness, like high blood pressure, that you take a pill for every day,” Dr. Byrd said.

Dr. Byrd and the OSUCCC – James are in the midst of a clinical trial for ACP-196, the second generation of ibrutnib. Dr. Awan recommended Tina for the trial after her cancer became more aggressive and she was hospitalized with fluid buildup in both her lungs. Tina went on the trial in April 2014, and her CLL was quickly under control.

“It’s amazing, it’s not chemo, so there are no side effects for me,” Tina said. “I was so sick before and now I feel normal again.”

Tina came to the OSUCCC – James on her birthday, September 19, for her regular screenings. She was sent up to the 5th floor and given an intravenous drip of immunoglobulin to boost her immune system.

Soon, in walked Will Chen, a third-year medical school student. He met Tina through the Health Coaching Partners program that pairs a student with a patient. They’ve become friends, and Chen, who was working on a different floor, stopped by to wish Tina happy birthday, chat and give her a hug.

“I’m walking every day now,” Tina told Chen. “Three miles a day and I’ve done as many as seven.”

Her next visitor was Kimberly Holt, a Patient Care Resource Manager at The James. More hugs and happy birthday wishes. And Holt had presents for Tina: A coloring book, coloring pencils and a box of low-calorie chocolate.

“Because I know you’re trying to lose some weight,” Holt said.

Dr. Awan stopped by soon after the other two left.

These praises are applicable to everyone she’s met at the OSUCCC – James, Tina said. “They must have a higher standard of hiring here because everyone I’ve met, everyone, has been so kind and caring. This is a special place. There’s hope here.”

Read about another patient ibrutinib has helped