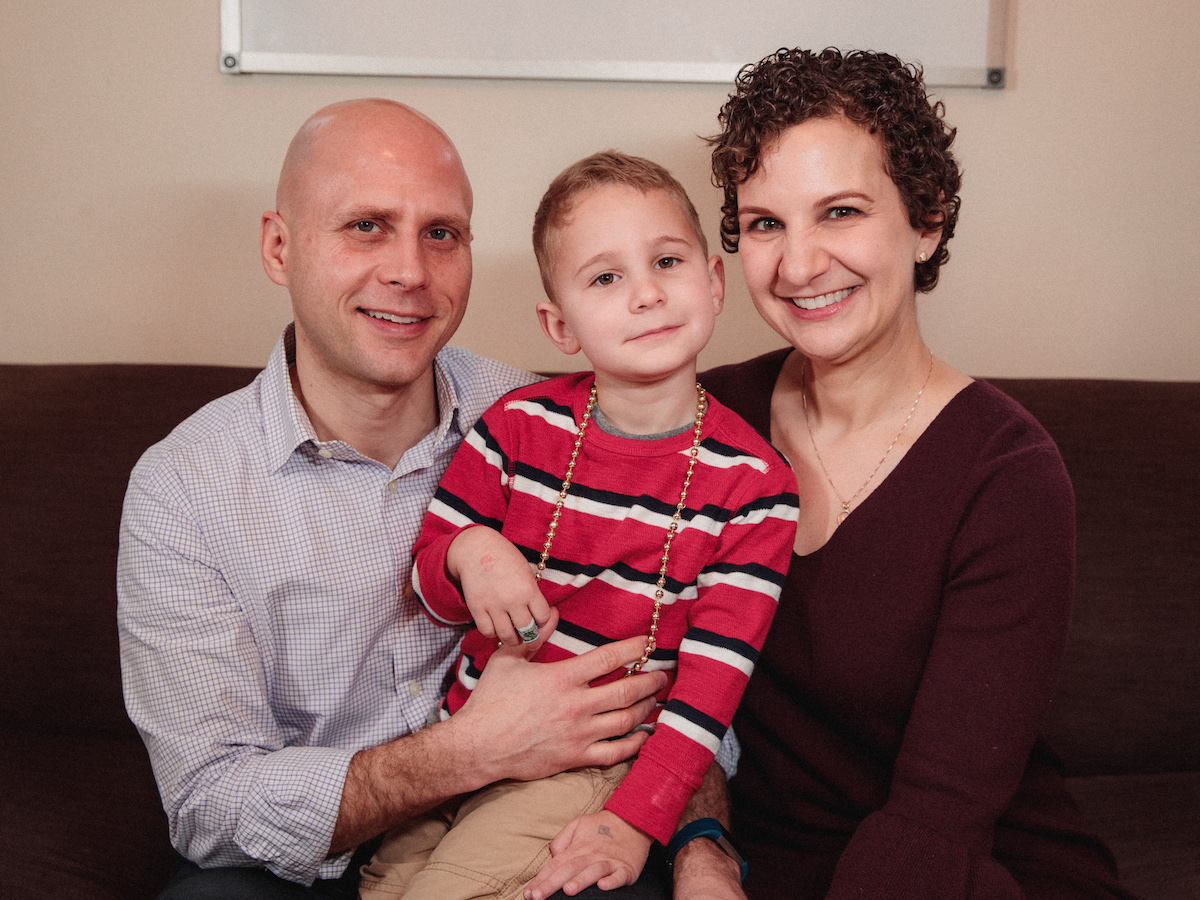 Mommy was going back to work after some time off during her breast cancer treatment.

“I was getting ready in the morning,” Aly DeAngelo says. “Leo (her 4-year-old-son) was used to me staying at home, but I said, ‘No, Mommy’s going to work today.’ Leo ran upstairs and got two of his stuffies and gave them to me to put in my bag and take to work. He says, ‘They’ll make you feel better.’ I got a little emotional.”

Aly still gets emotional when she tells this heartwarming story about that kind and caring little boy—and the father that taught him these valuable qualities as he took care of his wife and son during the ups, downs and emotions of cancer treatment.

“Leo learned so much from Rob,” Aly said of her husband, Rob Messinger. “Leo’s compassion, sympathy and empathy really blossomed, and it was all because of Rob.”

For this and many other reasons, Rob is one of four 2018 Step Up For Stefanie Champions, the annual award given by the Stefanie Spielman Fund for Breast Cancer Research to honor some of the many exceptional caregivers who help their loved ones during this difficult, life-changing—and life-affirming—time. They will be honored during the Step Up for Stefanie’s Champions Walk/Run on April 21.

“Part of the challenge was how to confront this in a realistic way without falling apart,” Rob said of how he approached his caregiving role. “How do I help Aly manage and make sure Leo isn’t traumatized?”

Rob was scared, but he “ tried to hide that from Leo, so he wouldn’t be scared.”

Rob is the director of communications for The Ohio State University Office of Business & Finance; Aly is a policy analyst for the Ohio Hospital Association; Leo is a stuffed-animal enthusiast. They live in Bexley.

“He never panicked and he never tried to sugarcoat things,” Aly said of Rob. “He had this attitude that, yes this sucks, but here are all the reasons we’re going to get through this. He let me have my moments when I felt sorry for myself, and he knew when to push me and just kind of get me over the hump.”

Once, when Aly returned home from a chemotherapy session, the mailbox was filled with dozens of cards from family and friends. “Rob arranged that,” she says.

When Aly’s port became infected, Rob “painstakingly removed the old packing, cleaned the wound, gently repacked it and found ways to dress it that would be the least irritating to me… every night for a month.”

“Aly and I talked a lot about it and made a real effort to help him understand things in a way that wouldn’t be scary,” Rob says. “He didn’t know anything about cancer or being sick other than getting a cold.”

And then one day, on her way to a chemotherapy session…

“Leo gave me Monkey to take with me.”