Step Up For Stefanie’s Champions an Emotional Event Celebrating Blessings 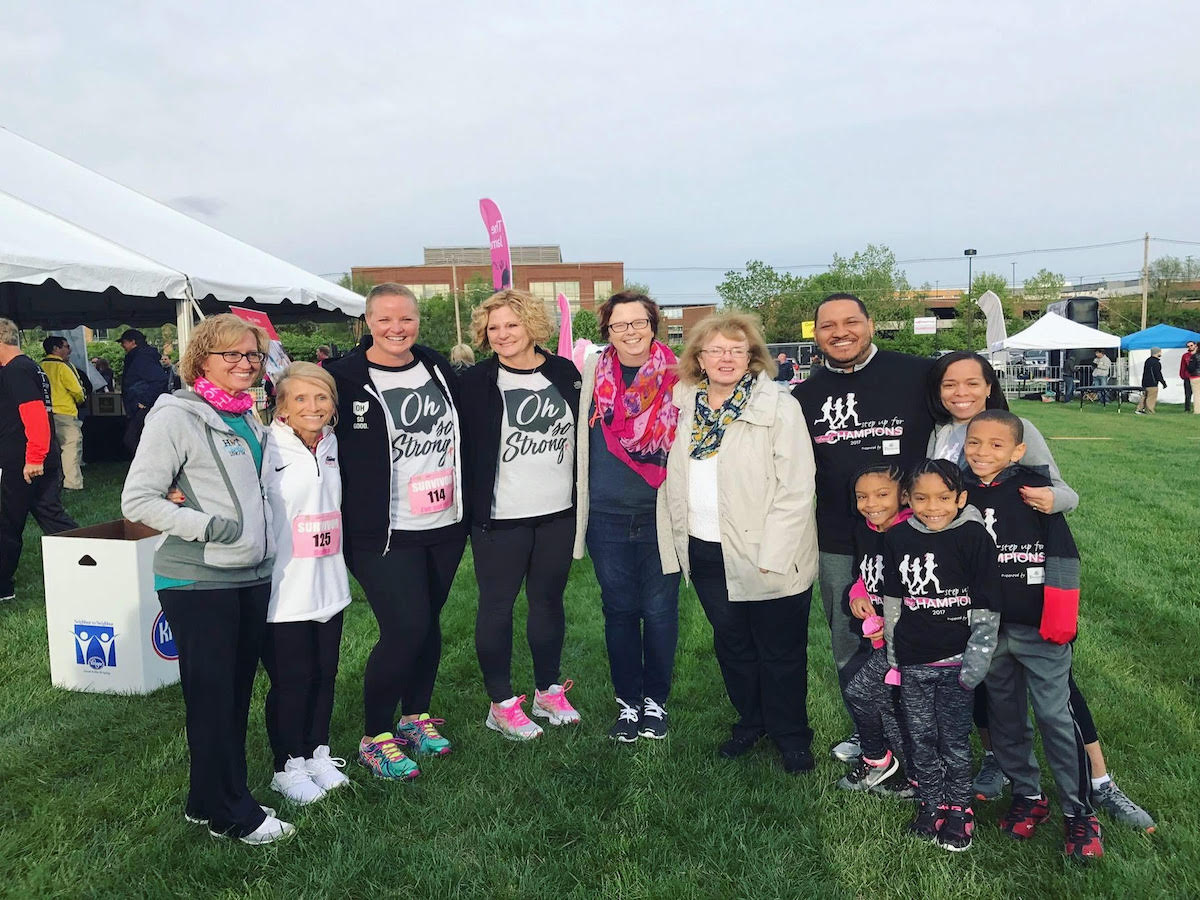 When Elaine Hausfeld’s daughter, Kimberly Wiford, was diagnosed with breast cancer, Hausfeld knew exactly what to do.

“I immediately called the Stefanie Spielman Center,” the Minister, Ohio, resident said. “And a few days later, she had an appointment and they’re taking such amazing care of her.”

Setting up her daughter’s first appointment at The Ohio State University Comprehensive Cancer Center – James Cancer Hospital and Solove Research Institute’s (OSUCCC – James) Stefanie Spielman Comprehensive Breast Center was the first item on the long list of things Hausfeld did for Wiford. She took care of the kids, made meals, drove her daughter to appointments and supplied plenty of hugs and encouraging words.

Deservingly, Hausfeld was one of the four caregivers who received a Champion Award at the 2017 Step Up for Stefanie’s Champions Walk/Run last weekend.

This annual event is a celebration of the life and ongoing legacy of Stefanie Spielman, who lost her long battle with breast cancer in 2009. Along the way, she inspired thousands of women in Columbus and beyond to fight hard, live and love life to the fullest — and fundraise furiously to advance cancer research.

Stefanie Spielman established the Champion Award to recognize one of the most critical factors in surviving cancer: loving, unwavering support. In Stefanie’s case, such support during her battle with breast cancer came from her husband, Chris. To show her gratitude, Stefanie gave Chris the very first Champion Award in 2000.

The pre-run/walk ceremony opened with the “Continue to Fight” video featuring Stefanie Spielman. “I’ve seen it hundreds of times and it still inspires me so much,” Maddie Spielman said of her mother’s words.

“Her legacy is being carried on by you,” added her father Chris Spielman as he spoke to the large crowd gathered outside the Spielman Center.

There were more than 2,100 runners and walkers, including more than 200 cancer survivors.

“When Stefanie and Chris started their foundation, their goal was to raise $250,000,” said Michael Caligiuri, MD, the director of The Ohio State University Comprehensive Cancer Center and CEO of the James Cancer Hospital and Solove Research Institute (OSUCCC – James). “They’ve now raised more than $20 million.”

Elaine Hausfeld first learned about the Breast Center when she went to visit a friend in 2013. “I thought that if ever I or someone in my family was diagnosed with breast cancer, this was where we were going,” she said. “They’re the best.”

Kimberly Wiford was diagnosed in April 2016. She and her husband have three children: Megan, 6, Valerie, 3, and Dana, 18 months old. “She just finished 30 days of radiation treatment,” Hausfeld said of her daughter. They both live in Minster, a 90-minute drive from Columbus. “She drove there every day, while I took care of the kids. I did everything I could to make it easier for her.”

That’s what moms do. And husbands.

Lorraine Pennyman was diagnosed with thymic cancer in 2011. The thymic is a small organ in the upper chest.

“We thought it was food poisoning at first and went to the emergency room (at The Ohio State University Wexner Medical Center),” said her husband, Chontae Pennyman. “She was really coughing a lot, so they decided to do a chest X-ray and saw the spot.”

“That’s something you never foresee happening to you,” Chontae Pennyman said. “I said, ‘OK, we’ve come to this point, and now it’s time to fight.’”

The Pennymans have three children: Jayden, 9, and the twins, Alana and Kyrn, 7, and a lot to fight for.

“We learned to focus on family first and that we have each other’s backs,” Lorraine Pennyman said at the Step Up event.

“Every moment is precious and fill them with love and excitement,” Chontae Pennyman added.

“And show your kids how to fight,” Lorraine said.

Susan Zanner passed away on January 8 from breast cancer. During the Bexley resident’s long cancer journey, she became an eloquent and brave spokeswoman. Her goal was to educate and fundraise, and Zanner was successful at both. About 25 family and friends came together on the Susan Strong team for the Step Up event.

“I’m having a hard time figuring out my life now, without Susan,” said her husband, Erick Zanner. “I’ve never been here before and I’m struggling. But, doing this walk and doing Pelotonia every year, that helps.”

Pelotonia is the grassroots bicycle tour that supports cancer research at the OSUCCC – James.

The support of his family and friends also helps. Jill Meyer was a Stefanie’s Champion in 2014, in recognition of her caregiving support for Susan Zanner.

“I have my good days and my bad days,” Meyer said. “But I know this is something Susan would have loved. She touched so many lives.”

Susan Zanner was treated at the Breast Center and was part of clinical trials that extended the length and quality of her life. “We should all take a knee and thank God for what Chris and Stefanie have done and for the Spielman Center, it’s a place of hope and compassion,” Erick Zanner said shortly before he began the walk.

As he looked around at the hundreds of people gathered to celebrate, advocate and fundraise, he became philosophical.

“Columbus is a big city now,” Zanner said. “But when so many of us can come together like this, to help find a cure, it seems like we’re a small community.”

Giving Back, Living with Cancer