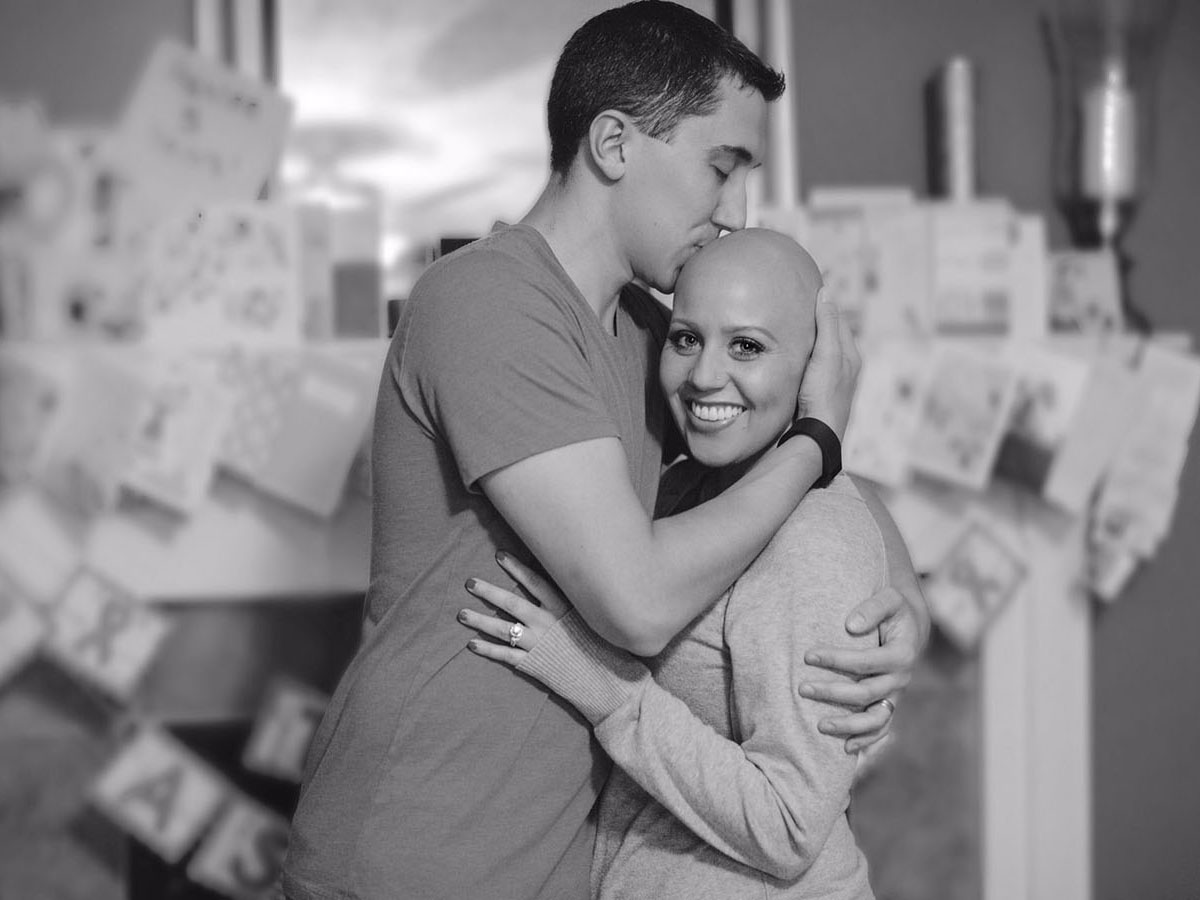 It wasn’t one big gesture that made her husband a hero through two bouts with cancer, Ashlee Hunt says. It was the little things he did.

Nathan held her hand through grueling treatments. He was with her during invasive procedures to preserve their ability to have children of their own. He worked late at night to make up for hours he missed at work to be with her in the clinic. He danced with her—or for her, when she was too sick to dance herself—the night before every single chemotherapy treatment.

Those moments and so many others led Ashlee to nominate Nathan for a Champions Award, an honor he received at the 2016 Step Up For Stefanie’s Champions Run/Walk.

The award recognizes people Ashlee calls “co-survivors,” who give exceptional support and love to patients during cancer treatment and recovery.

“It’s such an honor for someone to get that award,” she says. “(As a cancer survivor), you always think about how you can thank someone for everything they’ve done for you. And this is just a little gesture that you can do to nominate them. And then when they get to actually see or read what you wrote to nominate them, I think that makes a big impact on them.”

In the summer of 2010, Ashlee and Nathan had just gotten engaged. They were about to put a deposit down for their chosen wedding venue when she was diagnosed with stage II breast cancer. Their focus quickly shifted from centerpieces and wedding dresses to chemotherapy and treatments.

“I don’t know of any 25-year-old guy that would sit there and be like, ‘Yep, I’m just going to give up my entire life right now to help this person feel better, and I’m going to take on all of the responsibility,’” Ashlee says. “But that’s just the kind of person he is.”

The night before her first chemotherapy, Ashlee reached for Nathan and asked him to dance with her in their living room.

“I love watching him dance, because it’s hilarious,” she says. “And there was no hesitation to do it at all for him. He got really into it. And every week, he’d be like, ‘We have to get home and we have to do our Monday night dance.’”

Nathan was there for all of Ashlee’s treatments. He was there when chemotherapy made her nauseated. And he was there in 2015, when her cancer returned – just as they were hoping to start a family of their own. As Ashley went through more treatment, including a mastectomy, Nathan didn’t leave her side.

“A lot of people throughout my whole journey ask me how I’m doing, if I’m feeling better, how everything’s going,” Ashlee says. “But not a lot of people ask him how he’s doing with things. He’s coping with a lot of the same issues I am, just from a different perspective. I saw the Stefanie’s Champions thing and, for me, him being my co-survivor has been the real reason I’ve been able to get through all of this. So the fact that there was something that recognized those people who give support and all they do—because they do so much—was just amazing. It’s like one of the very few things I’ve seen out there that takes the time to recognize those people who are alongside the cancer patient. I had to nominate him.”

The Stefanie’s Champions Awards program began in 2000 to honor those who support cancer patients and to help raise money for cancer research. Over the last 17 years, Stefanie’s Champions has raised more than $1.7 million for the Stefanie Spielman Fund for Breast Cancer Research, which provides critical funding for breast cancer research, and which has helped scientists and doctors learn more about how best to treat drug-resistant breast cancers and how to target treatment to attack breast cancer cells.

For Ashlee, the award was a chance to say “thank you” to the person who was steadfast throughout her cancer fight.

Do you have a champion in your life? Nominate him or her for a Champions Award today! The nomination window closes Dec. 31.