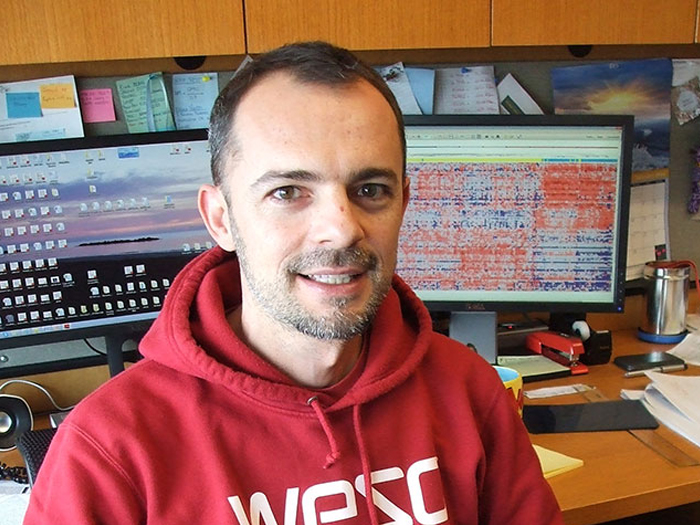 The study is published in the journal PLoS ONE.

“The treatment of women with triple-negative breast cancer is challenging because this malignancy can be very different genetically from one patient to another,” says co-senior investigator Dr. Charles Shapiro, director of Breast Medical Oncology and professor of internal medicine at the OSUCCC – James.

“We believe these microRNA signatures define novel sub-sets of triple-negative breast cancer and offer new insights into the biology of the disease and better ways to treat these patients,” Shapiro says.

The microRNAs that compose the signatures are involved in regulating cell growth, proliferation and survival, and in cell movement and migration.

“These findings strongly suggest that microRNAs play an important role in triple-negative breast cancer and might be used to better identify the most effective treatment for a patient’s tumor,” says co-senior investigator and researcher Dr. Kay Huebner, professor of molecular virology, immunology and medical genetics at Ohio State.

“Several of the deregulated microRNAs we found in the cancer samples are involved in chemo-resistance or radio-resistance. MicroRNA profiles can help us to improve and personalize therapies for individual patients,” she says.

Triple-negative breast cancer accounts for about 15 percent of all breast cancers. It is characterized by cancer cells that lack estrogen, progesterone and HER2 receptors. For this reason, these tumors do not respond to hormone therapies or HER2-targeted treatments.

MicroRNAs help regulate the kind and amount of proteins that cells make. They do this by binding with messenger RNA (mRNA), molecular copies of genes that are translated into proteins. When microRNA is bound to an mRNA, the messenger molecule cannot be translated into a protein. Instead, it is either temporarily stored or destroyed.

The researchers ran a complete microRNA profile and a cancer-focused panel of genes for each sample. They then generated microRNA signatures represented by certain prognostic microRNAs that, when deregulated, indicate odds of survival.

“This was a large cohort of triple-negative breast cancer cases and a major analysis effort that we believe makes this work extremely valuable,” Huebner says.

To stratify the cancers, the researchers determined microRNA and mRNA expression profiles in tumor, adjacent-normal tissue and lymph-node metastatic tissue from 173 women with the triple-negative breast cancer.

“We identified microRNAs and mRNAs that uniquely represent primary and metastatic tumors, and that are specifically deregulated in that stage of the disease, says co-author Dr. Pierluigi Gasparini, a postdoctoral researcher in Huebner’s laboratory.

The results define microRNA expression signatures that characterize and contribute to the differences between primary and metastatic tumors.

“We now want to learn which of these deregulated microRNAs might represent early biomarkers for cancer or metastasis detection,” Gasparini says.

The study’s key technical findings include:

“We believe these findings will be a reference point not only for our lab but also for many other research teams that might not have access to large patient populations, and hope that they will accelerate even more research on triple-negative breast cancer,” Huebner says.

The Ohio State University Comprehensive Cancer Center – Arthur G. James Cancer Hospital and Richard J. Solove Research Institute strives to create a cancer-free world by integrating scientific research with excellence in education and patient-centered care, a strategy that leads to better methods of prevention, detection and treatment. Ohio State is one of only 41 National Cancer Institute (NCI)-designated Comprehensive Cancer Centers and one of only seven centers funded by the NCI to conduct both phase I and phase II clinical trials. The NCI recently rated Ohio State’s cancer program as “exceptional,” the highest rating given by NCI survey teams. As the cancer program’s 210-bed adult patient-care component, The James is a “Top Hospital” as named by the Leapfrog Group and one of the top cancer hospitals in the nation as ranked by U.S.News & World Report.

Click on the name for a high quality JPEG of the researchers mentioned in this story.
Charles Shapiro, MD; Pierluigi Gasparini, PhD.