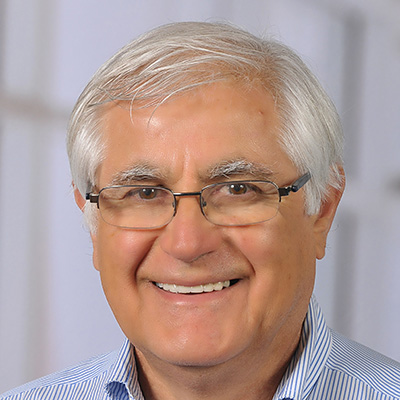 Philip Tsichlis, MD, is a professor in the Department of Cancer Biology and Genetics at The Ohio State University and co-leader of the Cancer Biology Program at the OSUCCC -James. He was recruited to Ohio State in 2018 from Tufts University School of Medicine in Boston, where he was executive director of the Molecular Oncology Research Institute.

At The James, Dr. Tsichlis' lab focuses on using insertional mutagenesis and other genetic strategies to identify genes involved in causing cancer or regulating phenotypic changes in tumor cells.

He is principal investigator for two studies funded by grants from the National Cancer Institute, including “Differential Regulation of RNA Processing by AKT Isoforms” and “The Role of Iws1 in Development and Tumorigenesis.

In the former, researchers are dissecting molecular mechanisms involved in linking the PI-3K/Akt pathway with RNA splicing and exploring the importance of these findings in lung cancer. In the latter, which is being conducted in conjunction with the lab of Vincenzo Coppola, MD, at Ohio State, researchers are examining the function of the transcription elongation factor Iws1. Based on earlier data from the Tsichlis laboratory, Iws1 plays an important role in human cancer.

Dr. Tsichlis has authored or co-authored dozens of articles in such prestigious scientific journals as Proceedings of the National Academy of Sciences, Nature Microbiology, PLOS One, Science, Journal of Virology and Journal of Immunology.

Back to Researcher Search