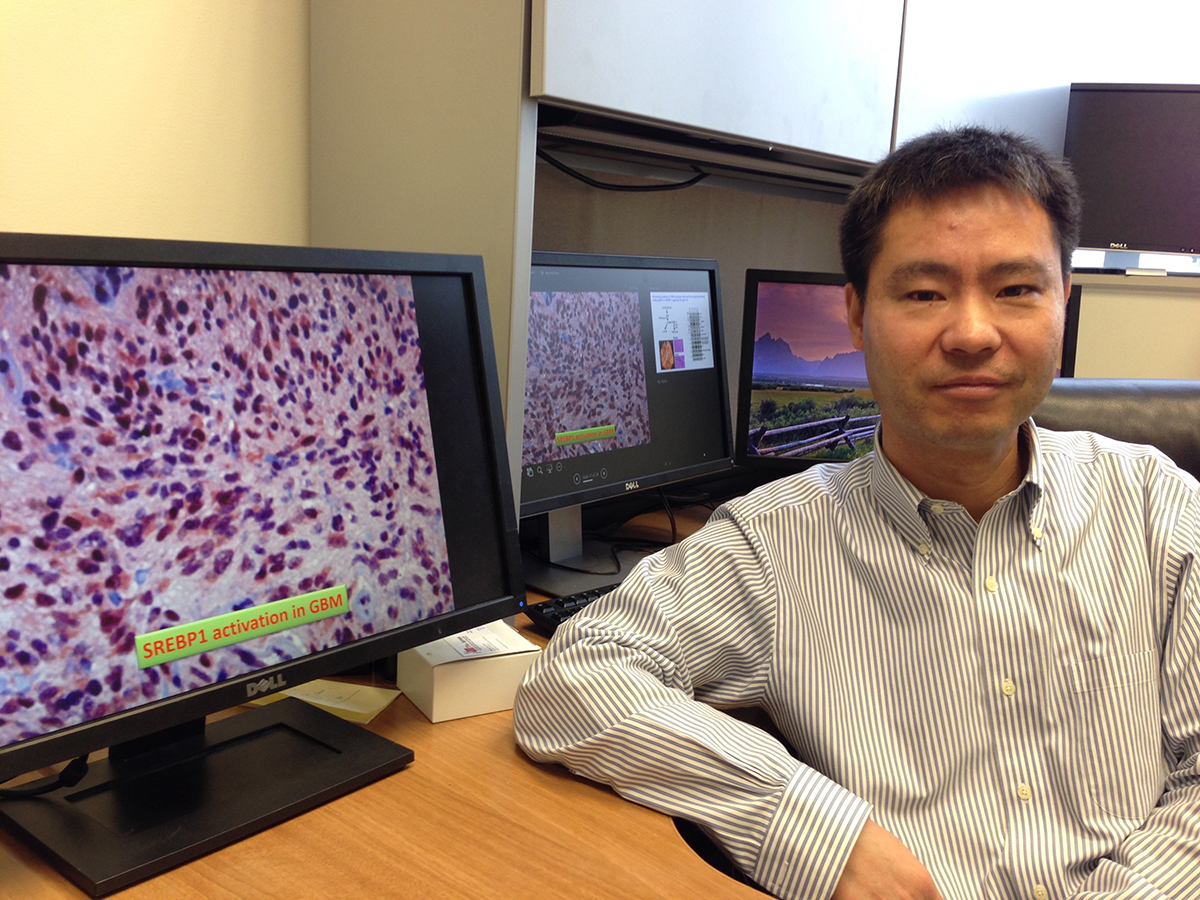 Glioblastomas are one of the deadliest forms of cancer.

These brain tumors “are very resistant to treatment, and it is so frustrating,” he said.

This frustration and the desire to do more for patients has driven Dr. Guo’s research for a decade and has led to a new strategy to shrink glioblastomas that has begun to attract a lot of attention. Dr. Guo’s team recently published a paper in Cancer Cell, and the American Cancer Society recently recognized his work as one of the 10 Key Breakthroughs and Insights of 2015 in the field of cancer prevention, diagnosis and treatment.

“To be recognized (by the American Cancer Society) means that our work is important — according to an outside evaluation team — and I think this award can help us to find the additional research funds we need,” Dr. Guo said.

His research has discovered the “previously unrecognized, critical role of glucose in controlling lipid synthesis during tumor development,” Dr. Guo said, adding he and his team “unraveled the mechanisms behind how glucose drives tumor growth.”

Glucose is the fuel that enables cells to divide and form new cells. When cells grow in an out-of-control manner, they become cancerous.

There has been considerable research on lipids, and several drugs have been developed and approved by the U.S. Food and Drug Administration (FDA). But the bulk of this research, and the drugs that were developed, have targeted diabetes, obesity and a range of cardiovascular issues, Dr. Guo said.

“In the cancer field, we are the only ones working on lipid research,” he said.

Lipids are fat-like substances found in the blood and body tissues. Small amounts of lipids are necessary for the body to function normally. Uncontrolled lipid growth results in cancer.

Dr. Guo’s research led him to discover the role of the sterol regulatory element-binding protein, SREBP, in the growth of glioblastomas. He believes SREBP “controls all the lipid growth. It is an enhanced regulator … and a target for a cure.”

An inhibitor that blocks the SREBP pathway would “prevent membrane growth in the lipid cells; so the cells can’t grow,” he said.

Additional funds for research will help Dr. Guo and his team as they move on to the next phase of their work: Finding or developing an inhibiting drug. The team is in the midst of testing several existing drugs.

“There are several that look promising,” Dr. Guo said. These drugs are currently used for diabetes, obesity and cardiovascular disease.

Because these drugs are already FDA-approved, it could make the jump to clinical trials with glioblastoma patients faster. “If we have to create a new drug, it would be more expensive and could take 10 years,” Dr. Guo said.

Dr. Guo’s journey to Ohio State began in China, where he was born and attended college, focusing on biology.

He did his postdoctoral work at the University of California at Los Angeles and transitioned from cardiovascular diseases to cancer research. This is when and where he began to study lipids and their link to cancer.

“I was always interested in cell division,” Dr. Guo said. “Why do cells divide so fast and form cancer, and finding targets to slow them down.”

Dr. Guo came to the OSUCCC – James in 2011 to start his own lab, which now includes three postdocs, a technician, two visiting scholars and four undergraduate student researchers.

Lipids are hard to investigate, said Dr. Guo, but he’s not afraid of a challenge.

“I like to work in a field where there are not too many others working, but is important,” he said.